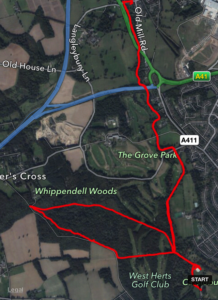 Who would have thought that going for a walk in Watford would provide an experience that we are still rhapsodising about 4 days later? In fact it was so terrific – and so peaceful – there is a strong temptation not to share it here!! However it’s fair to say that Whippendell Woods and Cassiobury Park feature in many of the local walking books and guides so maybe everyone knows about them but just didn’t fancy a trip there on a such a grey day?

We start at Cassiobury Park. This is about a 40 minute drive from our North London homes, up the M1 and through the maze of the Watford one way system. The nearest postcode for the car park is WD18 7LG – which brings us to the junction of Cassiobury Park Avenue and Gade Avenue – at which point the car park is clearly signposted. There is currently some construction work going on in the park so a section of the car park is closed but the overflow area is open which meant there is plenty of space.

Cassiobury Park itself is actually very pretty – the construction work appears to relate to some improvements to the play area. We take a path heading diagonally left in the general direction of the treelined bank of the river Gade and the play area. The building work is concentrated on the water play park – but the toilets alongside it are open; functional but ugly. (What is it with stainless steel toilets that is so unappealing?) 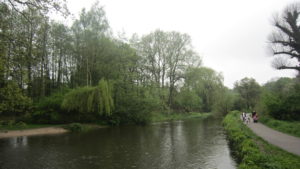 Leaving the playground area we pass the miniature railway track on our left and head out of the park across the river Gade towards the Grand Union Canal. At this point we are at Watford Lock, we cross the bridge to the towpath on the far side where there is a footpath signpost at the entrance to Whippendell Woods. We take the path right marked ‘Footpath 30’ which initially runs parallel to the towpath. As it gradually moves away from the towpath we skirt the edge of a golf course and the path widens out into an avenue of lime trees. We cross a fairway where we take care to not distract the golfers! 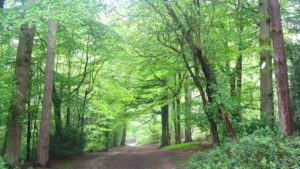 At the end of this avenue there is a junction of paths and we divert from our planned walk around the periphery of the woods to take the path straight ahead which looks especially appealing. The path heads downhill initially and in fact undulates gently up and down through beautiful woodland for quite sometime. We ignore all paths off left and right (apart from to take some lovely photos of the amazing swathes of bluebells all around). 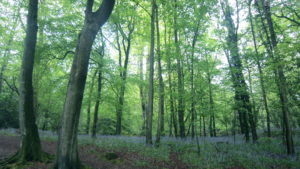 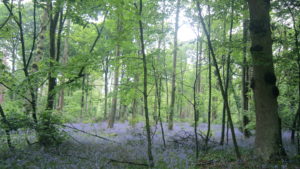 Eventually we arrive at another junction of paths with a wooden gate ahead onto a lane. We get our bearings at the gate but in fact need to take a left at the junction onto a path which runs parallel to the lane here. We again ignore paths off to the left and continue along this path – stopping frequently to take far too many photos of the bluebells – and then suddenly Alison spots a gorgeous little fawn in the bushes. This is soon followed by another sighting of an adult deer – we desperately try to get a photo but are effectively unsuccessful. It’s difficult to convey in words how charmed we are by this – two beautiful animals in this heavenly setting – it’s as if someone has cast a spell.

We continue on this path with a field to our right, alongside Rousebarn Lane just beyond the hedge. We come to a junction of several paths and go straight ahead between the board with a map on it and the gate onto a narrow path through more woodland until we come to a T-junction. Here we turn left following the sign to Cassiobury Park. The path is uphill here crossing the golf course three times altogether (two fairways one after the other and then a further one a few yards later). Just after crossing the golf course for the third time the path goes downhill and we are back at Watford Lock.

Here we now turn left onto the towpath which is on the left of the canal at this point and proceed on a straightforward route – up to the M25/A41 junction and back. Sounds pretty unprepossessing doesn’t it? But I promise it’s anything but… 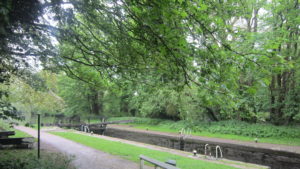 Firstly we pass Whippendell Woods on our left with school playing fields stretching far away on our right. We pass locks and weirs – at one point we spy a heron taking a shower in a lock! We glimpse the golf course we crossed previously – now on the far bank as we have crossed the canal by now. We go under (and occasionally over) bridges – making sure to cross white bridge no. 163 where there is a path that also continues straight on. 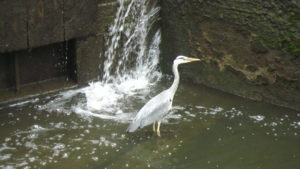 We go under the M25 spur – almost a tunnel – and then shortly after under the A41. The path now runs parallel to the A41 and we walk past some lovely houses and hotels backing onto the canal – mostly on the opposite bank. At the next bridge we go under and then double back on ourselves to take the path up and onto the pavement. We cross the road bridge over the canal walking along Bridge Road towards the Kings Head pub. Tucked behind the pub in the old coach house is a delightful cafe. It is part of the same enterprise and both the pub and cafe share a pretty garden space – unfortunately today it’s now raining so we have to take shelter inside! 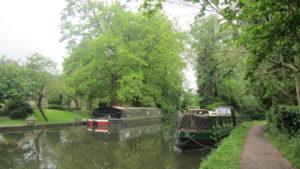 A lovely pitstop – toasted teacake and coffee – and having made use of the smart toilet facilities – we retrace our steps back to the Grand Union Canal. 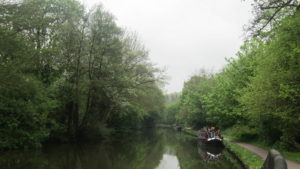 We return the way we have come along the towpath – this is just as gorgeous on the way back and offers slightly different vistas (albeit wetter in this direction today). 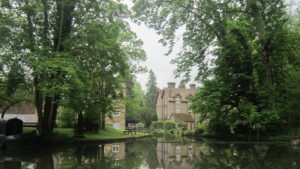 Eventually we are back at the Watford Lock and the entrance to Cassiobury Park. On entering the park we spy a huge blue and gold macaw flying through the park and then perching on top of a dead tree. It’s amazing – huge and glorious. We walk back to the car park and spot it again – this time flying around with a friend – a small green parakeet!

What a fantastic way to round off a super walk. Thoroughly enjoyable.