In short: an urban delight – all sorts of unexpected views and wildlife surprises! Solid canal towpaths all the way apart from the firm footpaths in both parks so ordinary walking trainers are fine. Free on street parking, public toilets en route and two lovely pitstops – one at the halfway point and the other at the end. 2 hrs 50 mins walking + 45 mins pitstops in total. 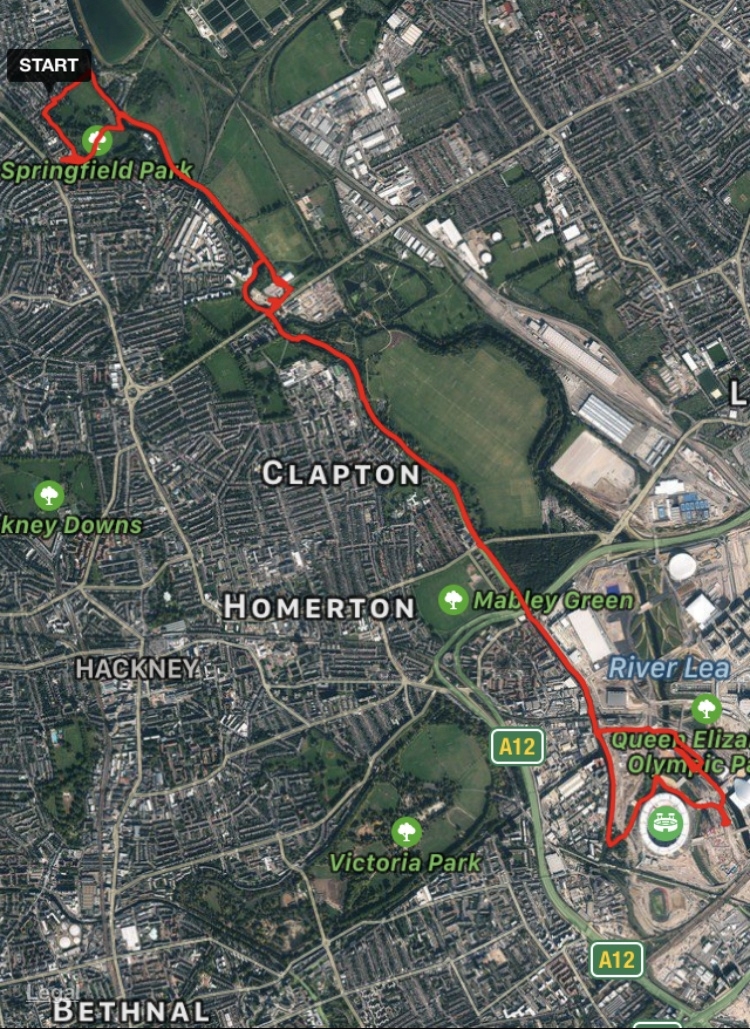 This walk really is a delight – and just what the doctor ordered for the two of us, both feeling rather January jaded for a variety of reasons. It’s well over a year since we’ve done this one – hence why it hasn’t previously appeared on this blog – and there have been quite a few changes in and around the Olympic Park which we have not previously been able to get into from the canal.

We start by driving to Springfield Park in Hackney – there is plenty of free parking on the road beside the park, Spring Hill, approx postcode E5 9BE. Ordinarily this is about a 20 minute drive from Muswell Hill but today the traffic on Green Lanes is dreadful so it’s a bit slower than that.

Having parked up we walk along the road with the park on our right towards the canal at the end of the road. We turn right under the bridge here and continue along the towpath with the canal on our left. Immediately we are transported miles away from busy East London as we pass a marina on the far side to our left and the first of many many boats moored along the canalside. 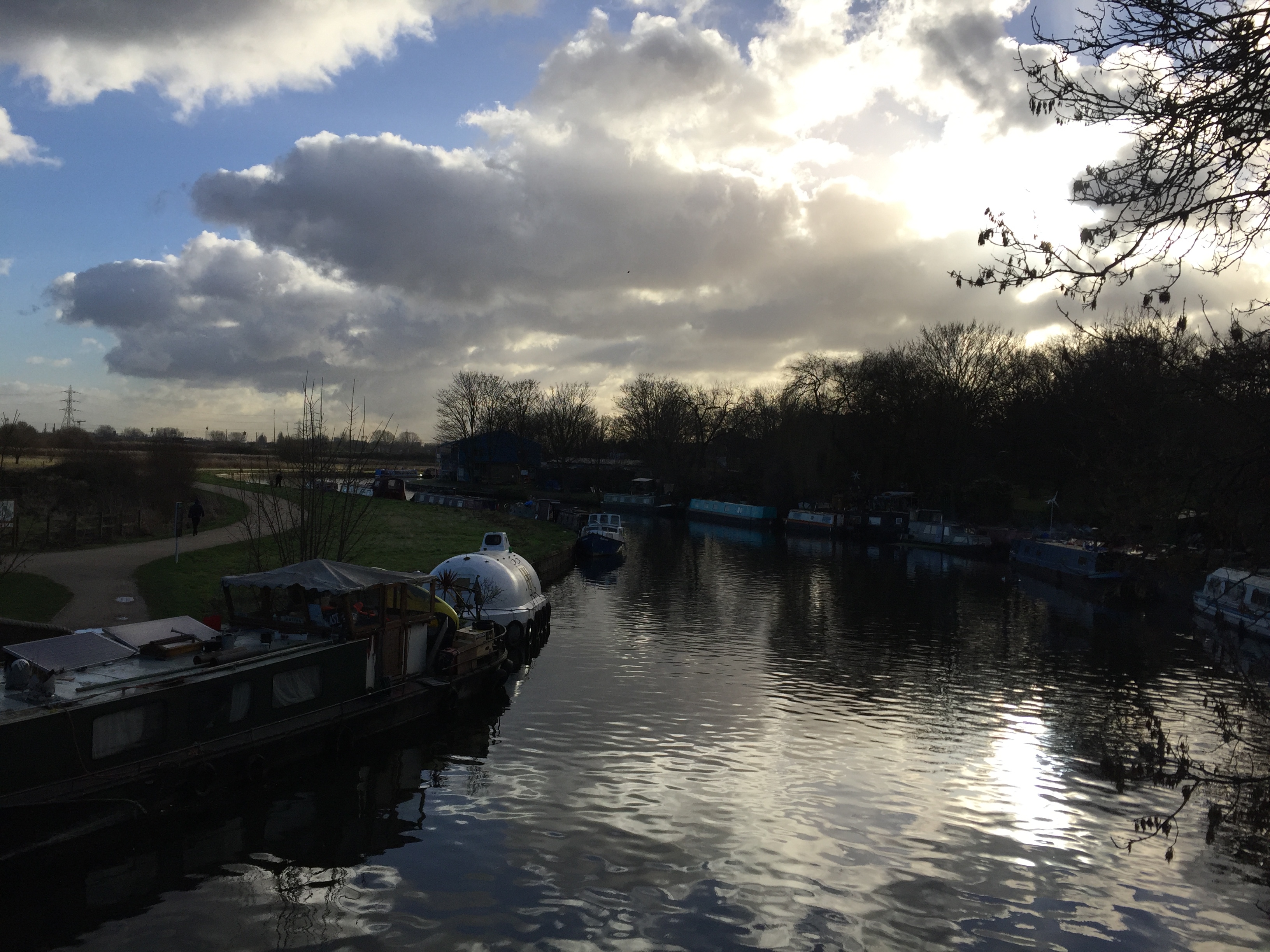 As we reach the end of the park on our right the path crosses the canal at a bridge and continues on the left of the canal with the wide open Walthamstow marshes on our left. 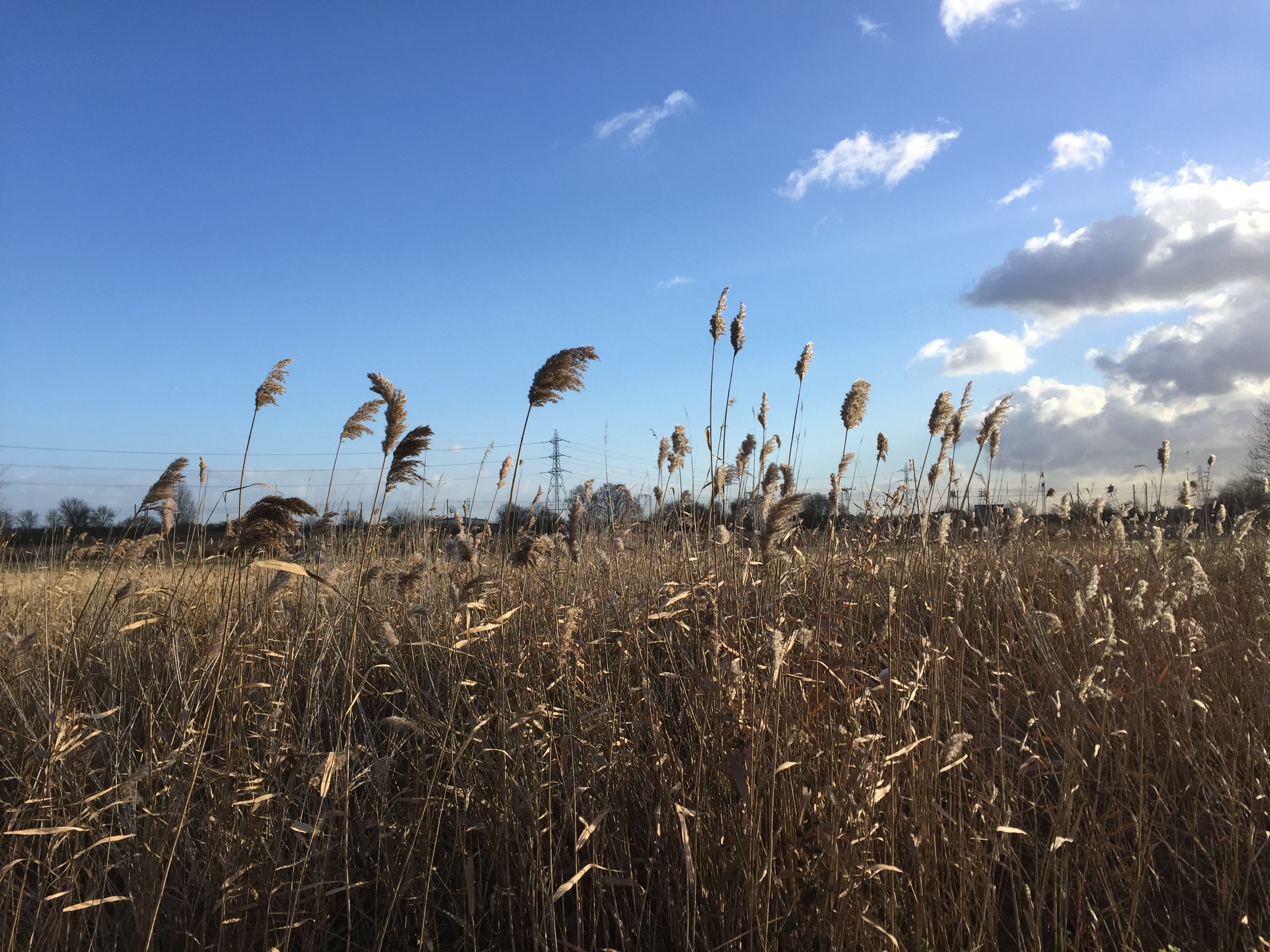 After passing a rowing club on our right we pass under a railway bridge and continuing straight on at a bridge off right we come out beside the Lea Valley Ice Centre – where we make use of the public toilets before continuing on our way.

We walk out through the car park, cross and turn right onto Lea Bridge Road. After crossing the canal we drop down on a path beside the canalside pub, The Princess of Wales, and continue right along the towpath with the canal to our left.

Shortly after this we cross at a bridge and continue with the canal and a variety of housing on the right and Hackney Marshes on our left. 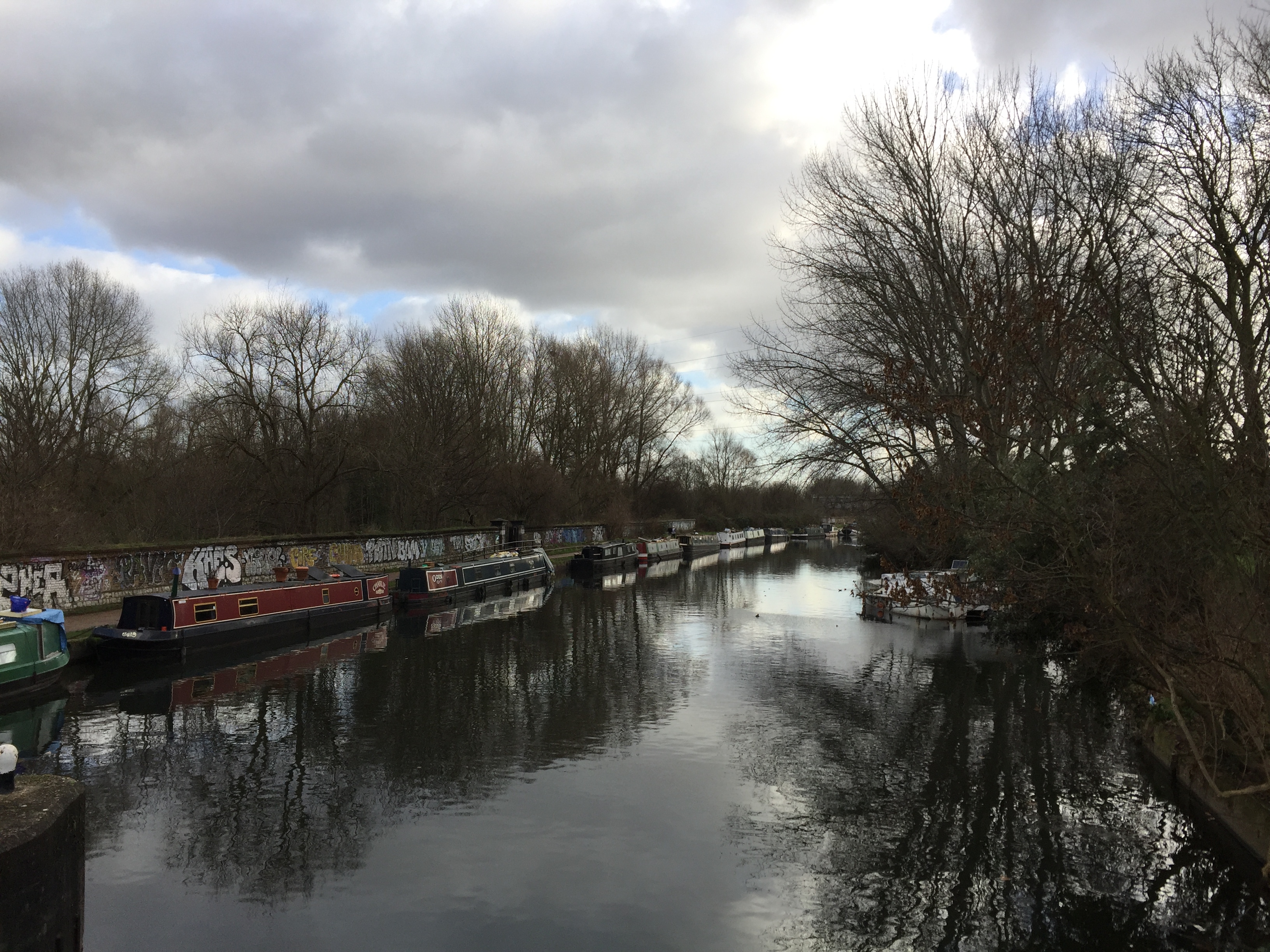 There is a glorious smell of woodsmoke as we pass the boats and plenty of activity on the towpath – particularly cyclists, many of whom seem to have left their bells (and their manners?) at home!

We continue straight along this path for some time – under road and footbridges – passing some astounding street art (how do they reach these spots?) – until rounding a corner the iconic buildings of the Olympic Park – the stadium and the ArcelorMittal Orbit Tower in particular – come into view. 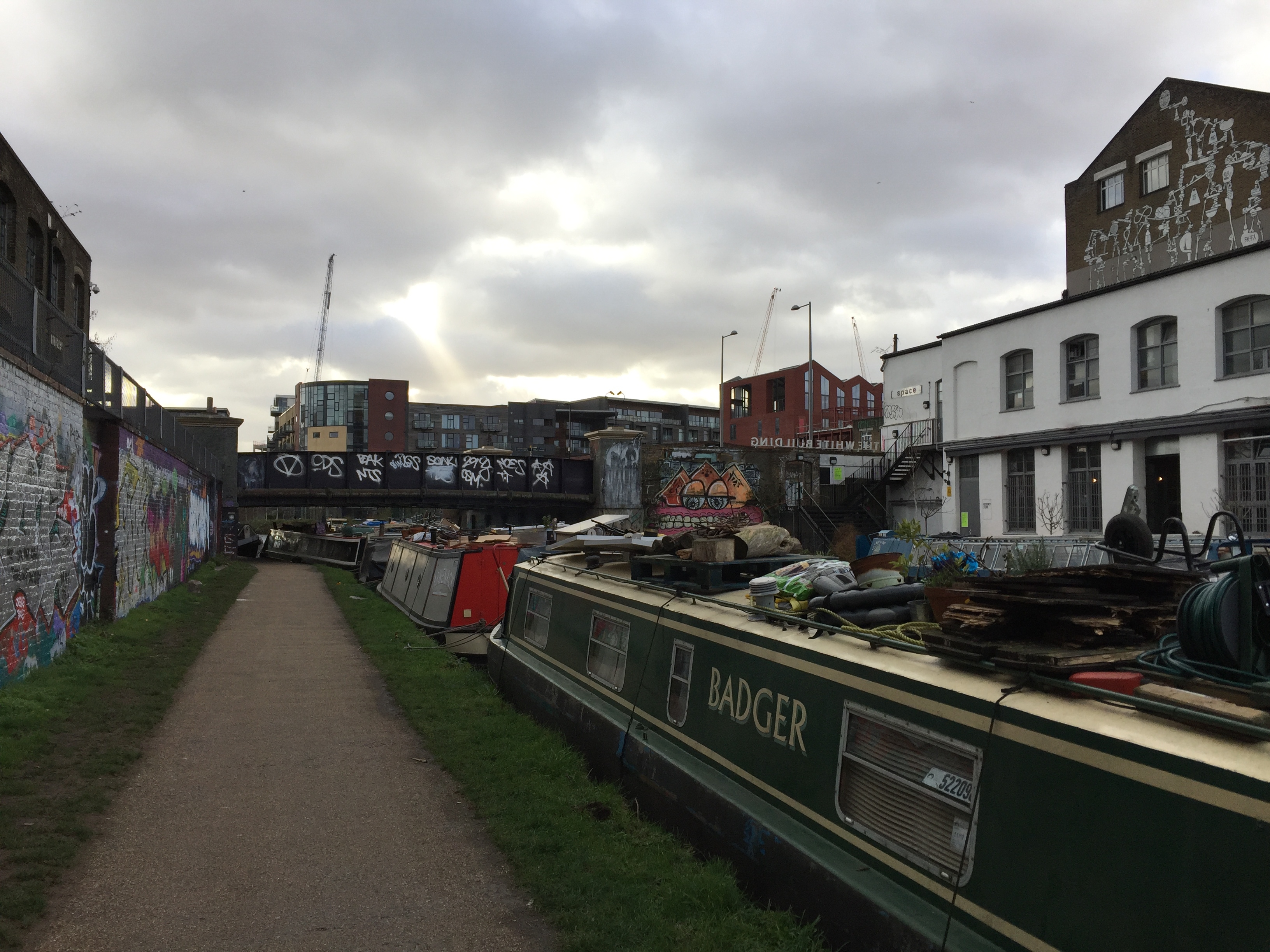 We continue on along the towpath, passing some new soft landscaping on our left and equally new looking cafes until we finally reach Old Ford Lock. This always used to be our end point – here we would stretch, eat a cereal bar and return the way we came but now it is possible to continue into the Olympic Park itself and so we do.

Just after the lock we take the bridge to our left across the river which joins the canal here. This path brings us alongside the Olympic Stadium – now home to my own club, West Ham United, and we (reverently?!) walk around the outside of it. 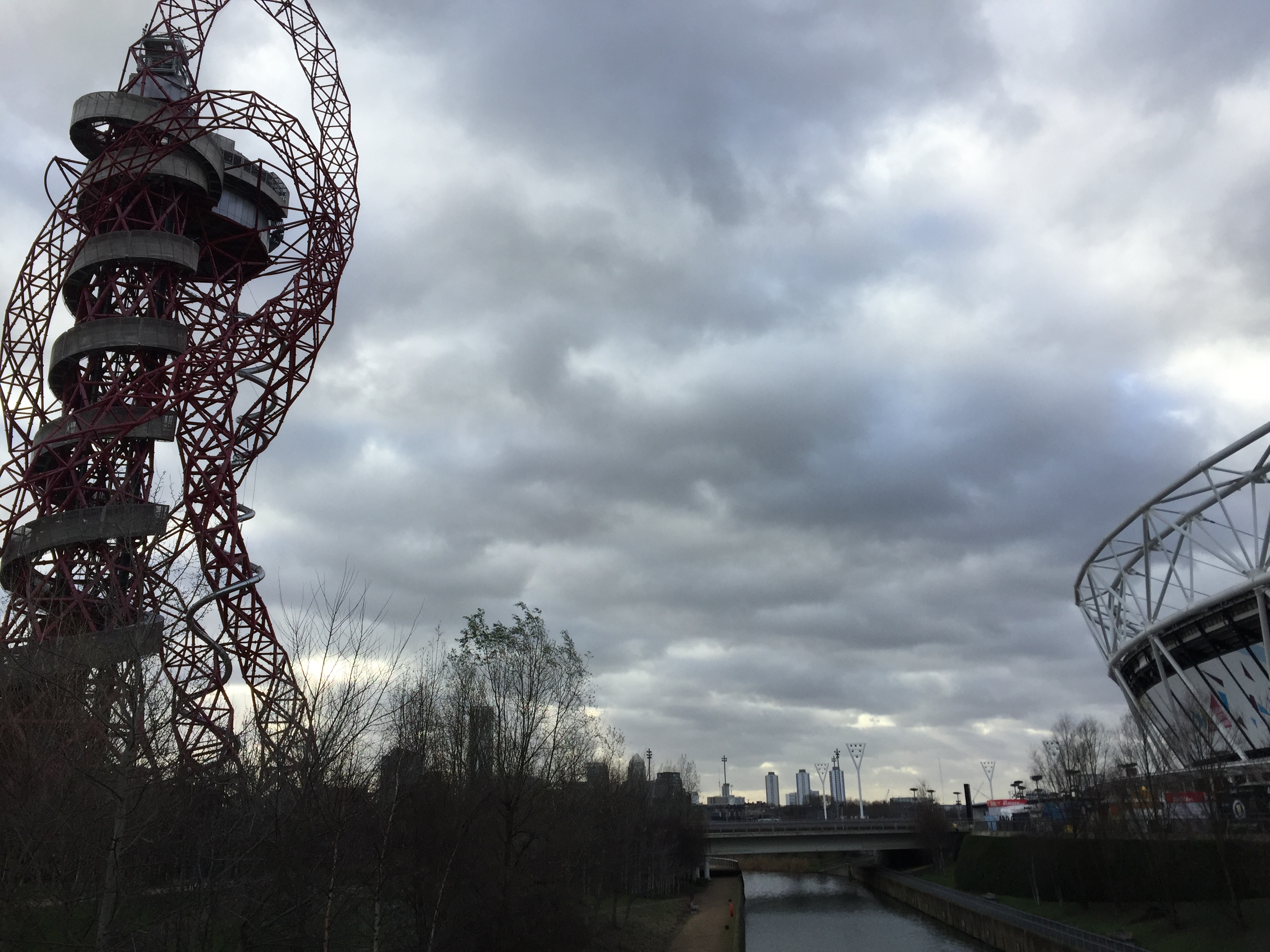 As we reach the far side of the stadium we cross the bridge leading to the Mittal tower as it’s apparent there is a cafe there, the Podium. This is a great spot and we stop for a pitstop – a delicious pain au chocolat and to be honest a slightly inexpert coffee made by the lovely but very inexperienced barista. Toilets are clean and very well appointed and I would imagine this is a great place in the summer as it apparently has an outside upper terrace which must have fantastic views. 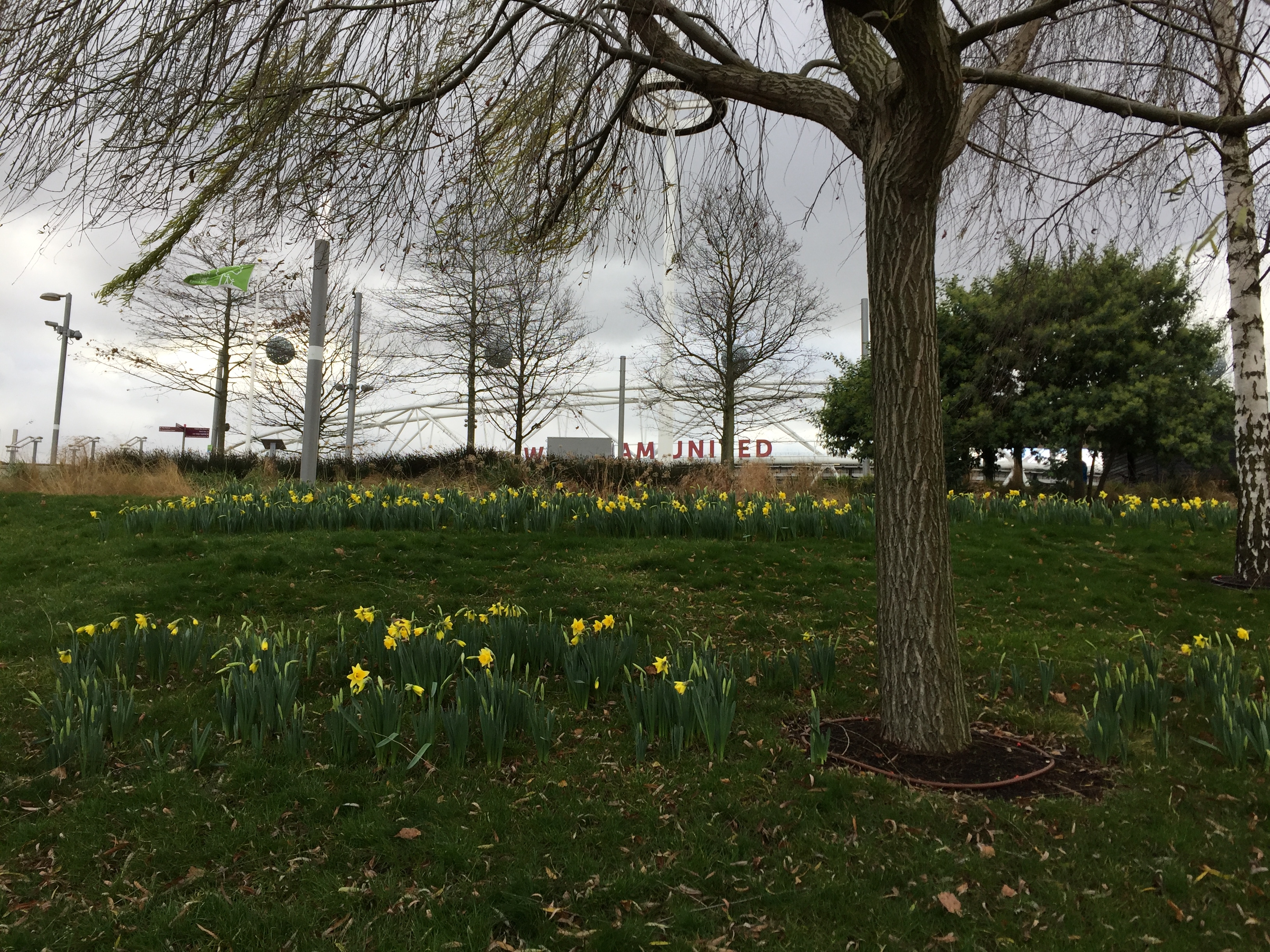 We turn left out of the cafe and head down to the towpath alongside the river on our right, passing the first daffodils of the year on our left and what appear to be swan shaped pedaloes over on our right!

After passing under 2 bridges we realise we have reached a dead end and retrace our steps to the second of these bridges to cross the river we are following – it is now on our left. This allows us a closer look at the 3 cormorants that are perched on the posts in the water here – bold as brass and one at least throwing out it’s wings for a good showing off. 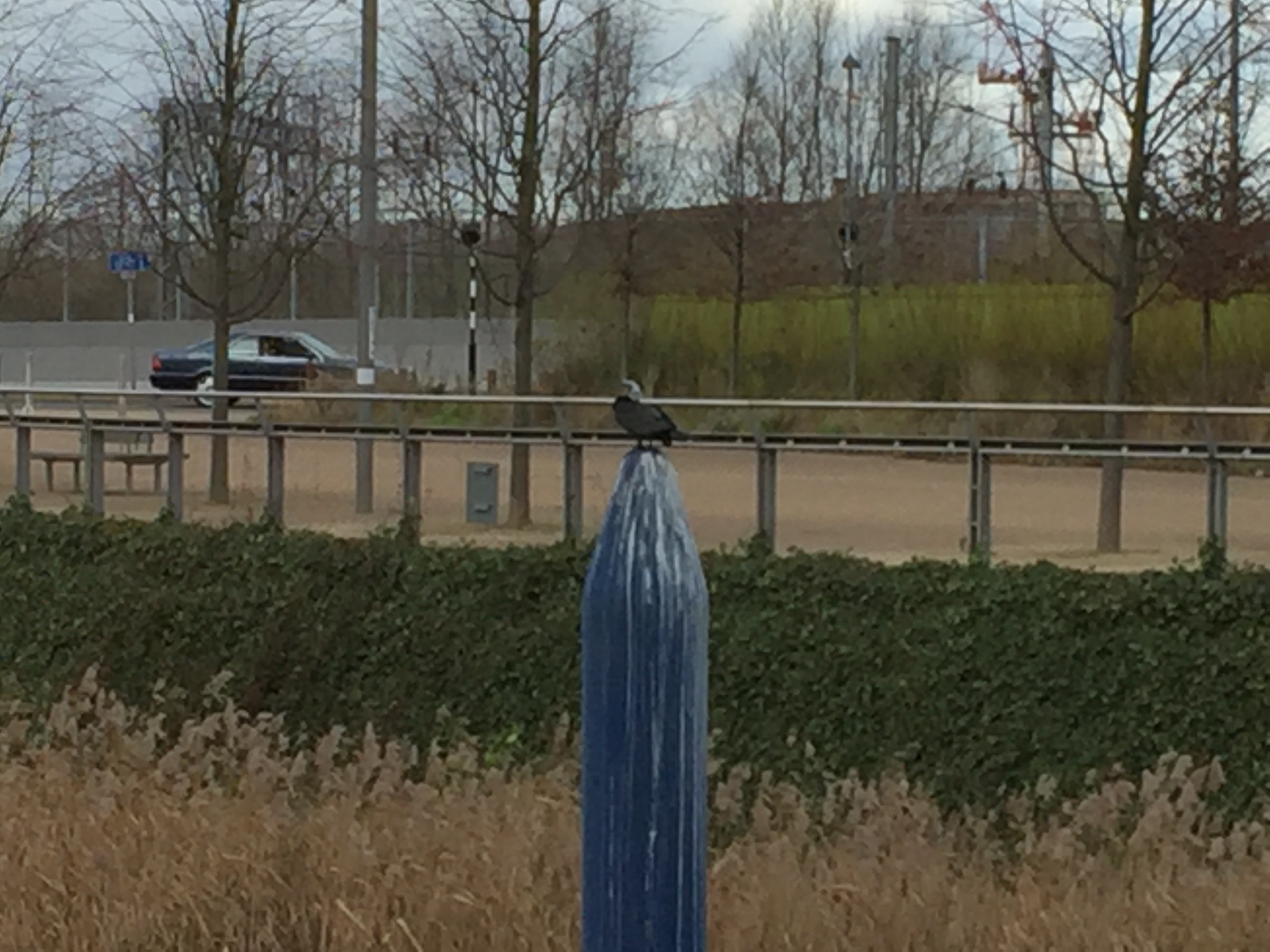 At the next bridge we come up to street level and cross the river at the road – and although we’d like to find our way a bit further up this towpath we aren’t confident that we’ll be able to negotiate our way around the tangled road junctions and back eventually to the canal. And so we decide to take the direct route and, continuing along this road we return to the towpath just in front of the next bridge.

We now return the way we came with the canal on our left, crossing at the bridge after Hackney Marshes and continuing under the road bridge beside the Princess of Wales pub and over the bridge after the park here to return to the towpath on the right of the canal alongside Walthamstow marshes. 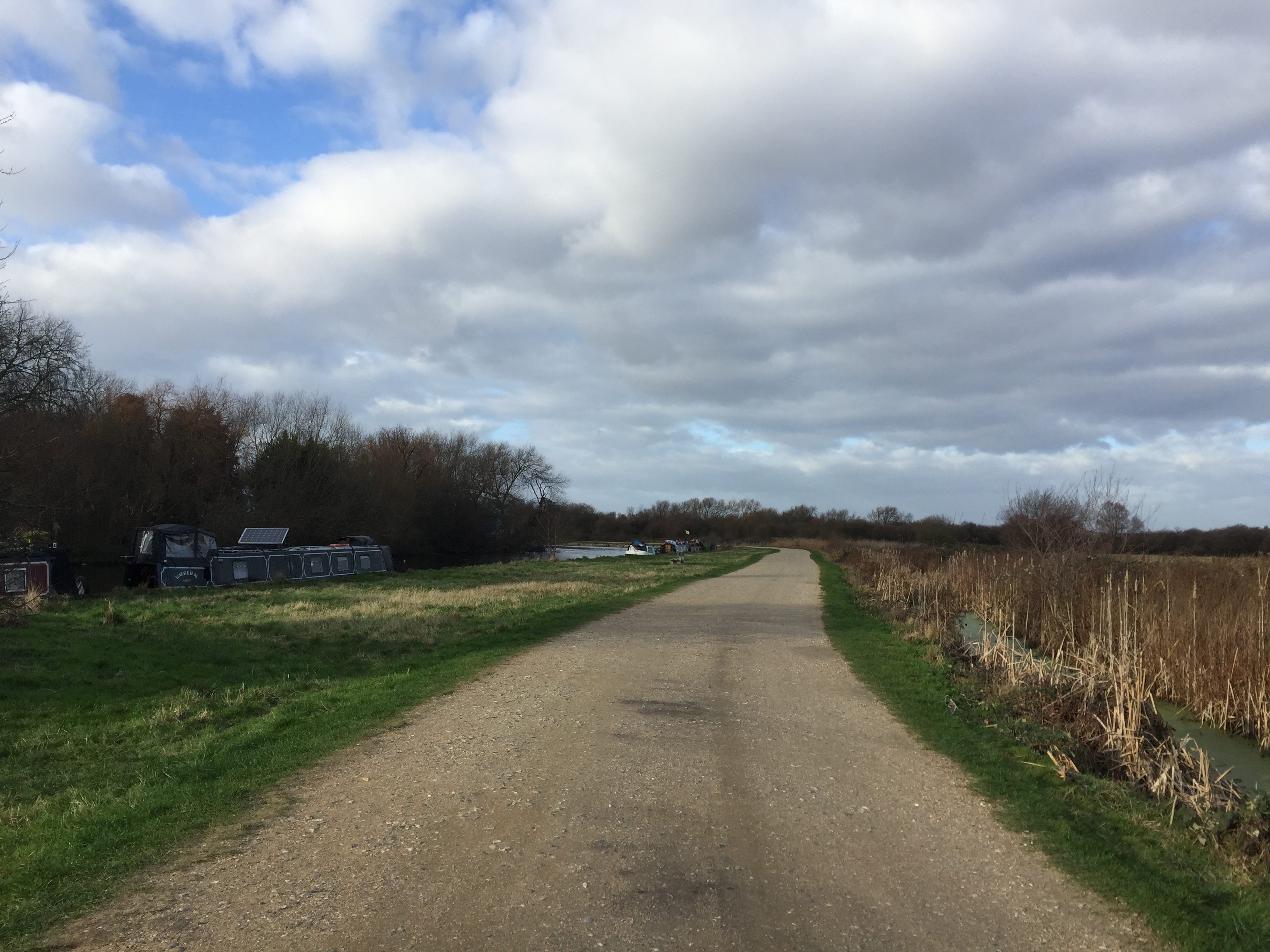 Just after crossing at the next bridge we turn left into the park, and walk along the path left – and then right at the park entrance proper and head uphill. Springfield Park is an absolute gem – tucked away in the heart of Hackney with amazing views across the canal and the reservoirs beyond. In the summer it is so gloriously green and beautifully landscaped that it is worth the trip here alone – even without the delights of the River Lea.

Continuing on up to the crest of the hill brings the main building in to view – a municipal building with extremely plain, although functional, toilets and the most delightful cafe. The food here is all fresh and homemade – we had soup on this occasion but in the summer have revelled in their yummy mezze platters. Coffee is also great – and the prices are extremely reasonable; highly highly recommended.

After a second pitstop of the day we leave the cafe building and walk around the outside to pick up the path that runs across the top of the park with lovely landscaped views extending to our right. 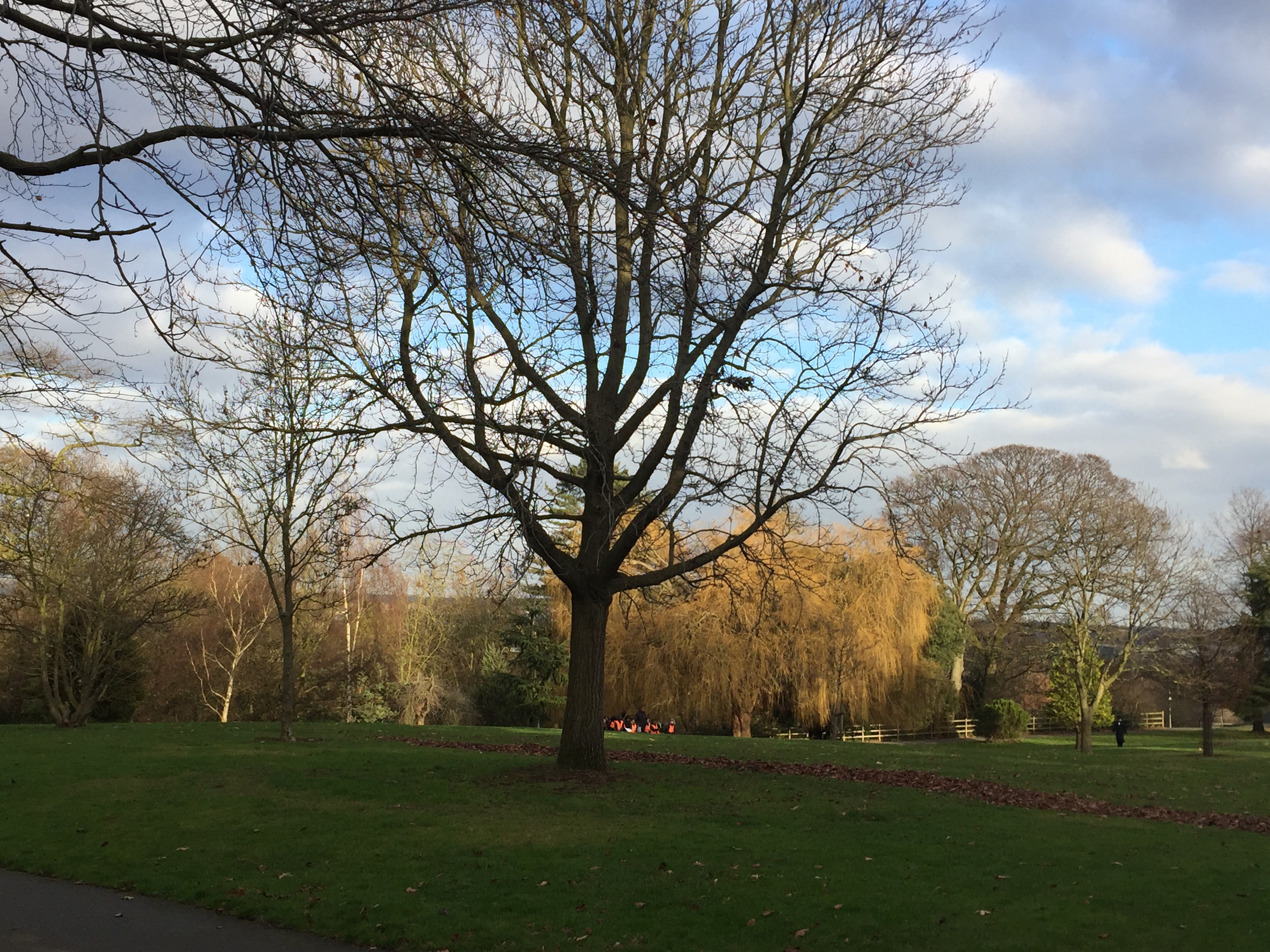 This path brings us out onto Spring Hill where we are parked. This is such a simple easy walk – very flat so the 8+ miles fly past. An astonishing glimpse into hidden parts of London – everyone should do it!!