In short: a delightful shady walk on an exceptionally hot day. A couple of different paths and views than normal. Plenty of free parking; toilets in an exceptionally poor state (very far from the norm here); delicious sandwich at the lovely cafe. 1 hr 50 mins walking + 30 mins pitstop. 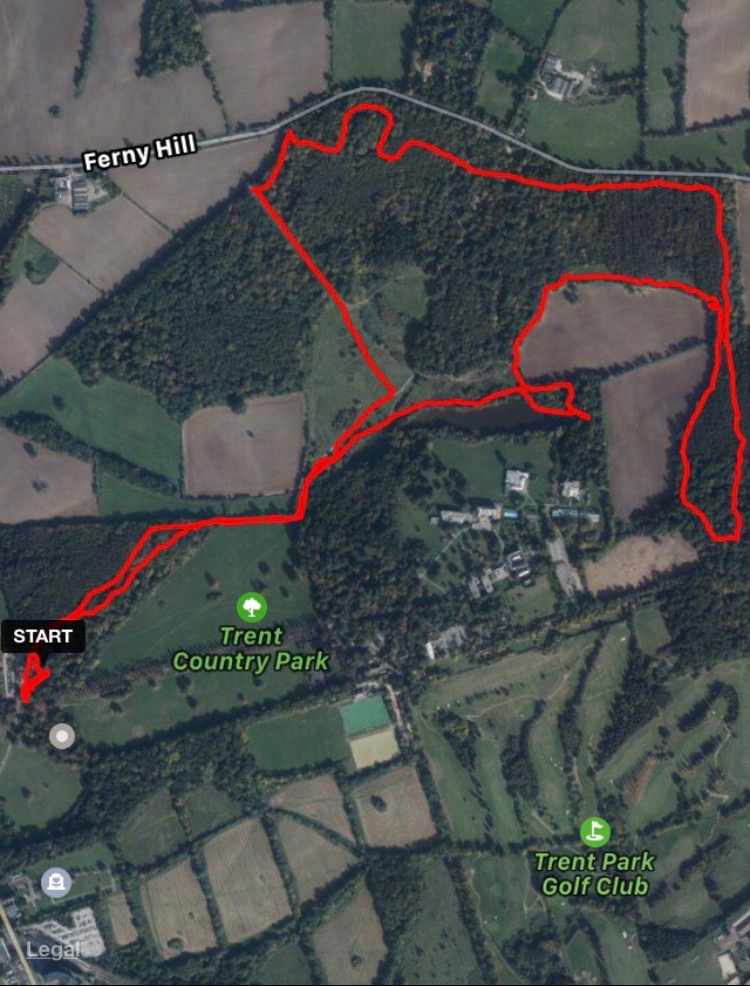 It is an absolutely sweltering hot day in London today – with temperatures predicted to peak at 34’C later. I’m on my own today so need something safe and familiar – but also with plenty of trees for shade. I decide to head to Trent Park.

Parking as usual in the car park just off Cockfosters Road, postcode EN4 0DZ, I head to use the toilet facilities but they re in an absolutely disgusting state – at a guess a group of kids has gone in the previous night and decided to smear every single toilet with poo – beyond revolting. I hold my nose and use the least worst – but don’t fret too much as we often see a cleaner down there.

And so I head off on my walk – starting by taking the path out of the car park beside the refreshment van next to the cafe. This is signposted for the London Loop. 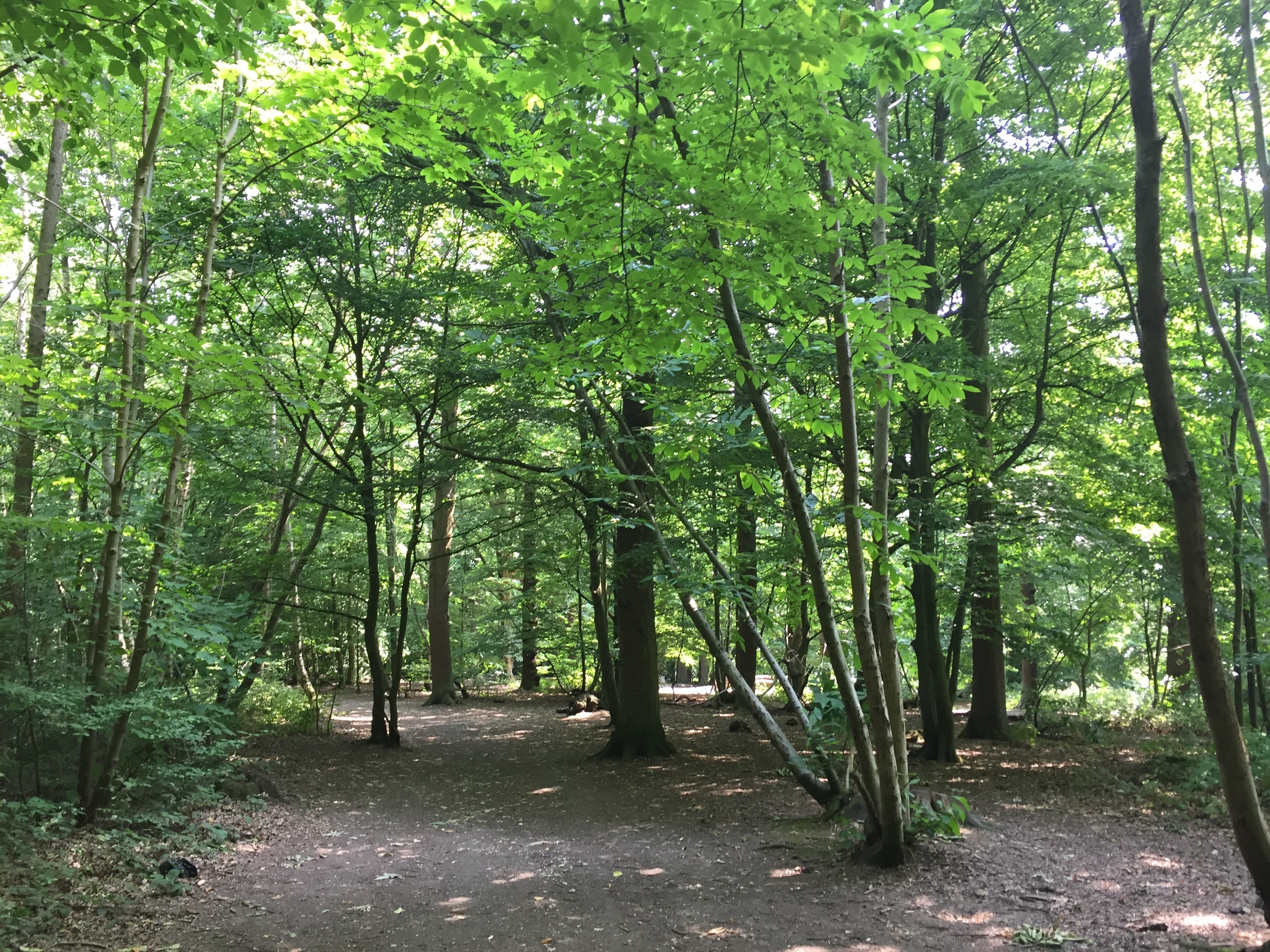 I head down through the lovely shady woods here, bearing right with the path as the woods end to eventually leave over a small wooden bridge out onto a meadow. 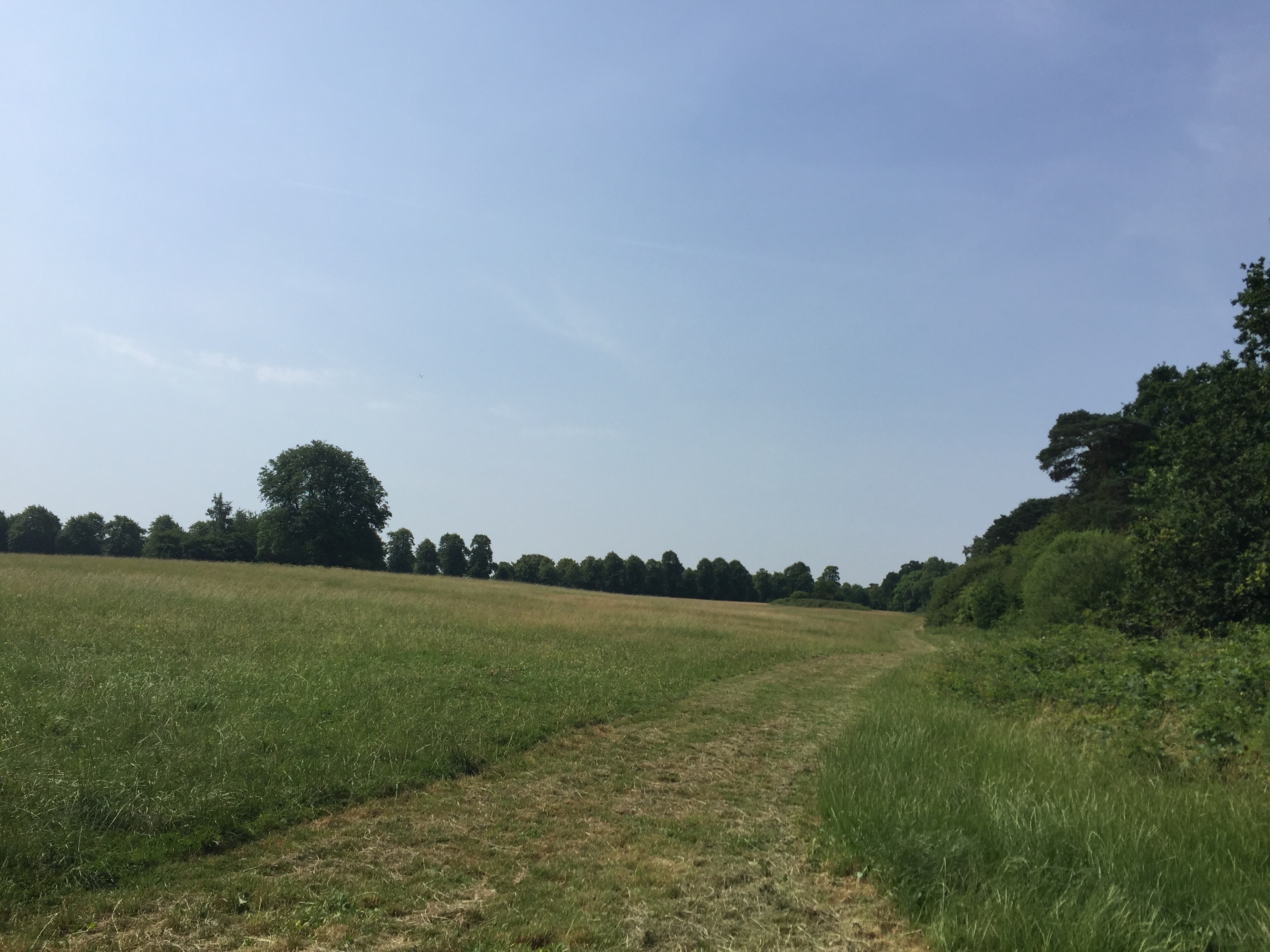 The path continues with the meadow to my right until at the end I turn left in front of a gate. 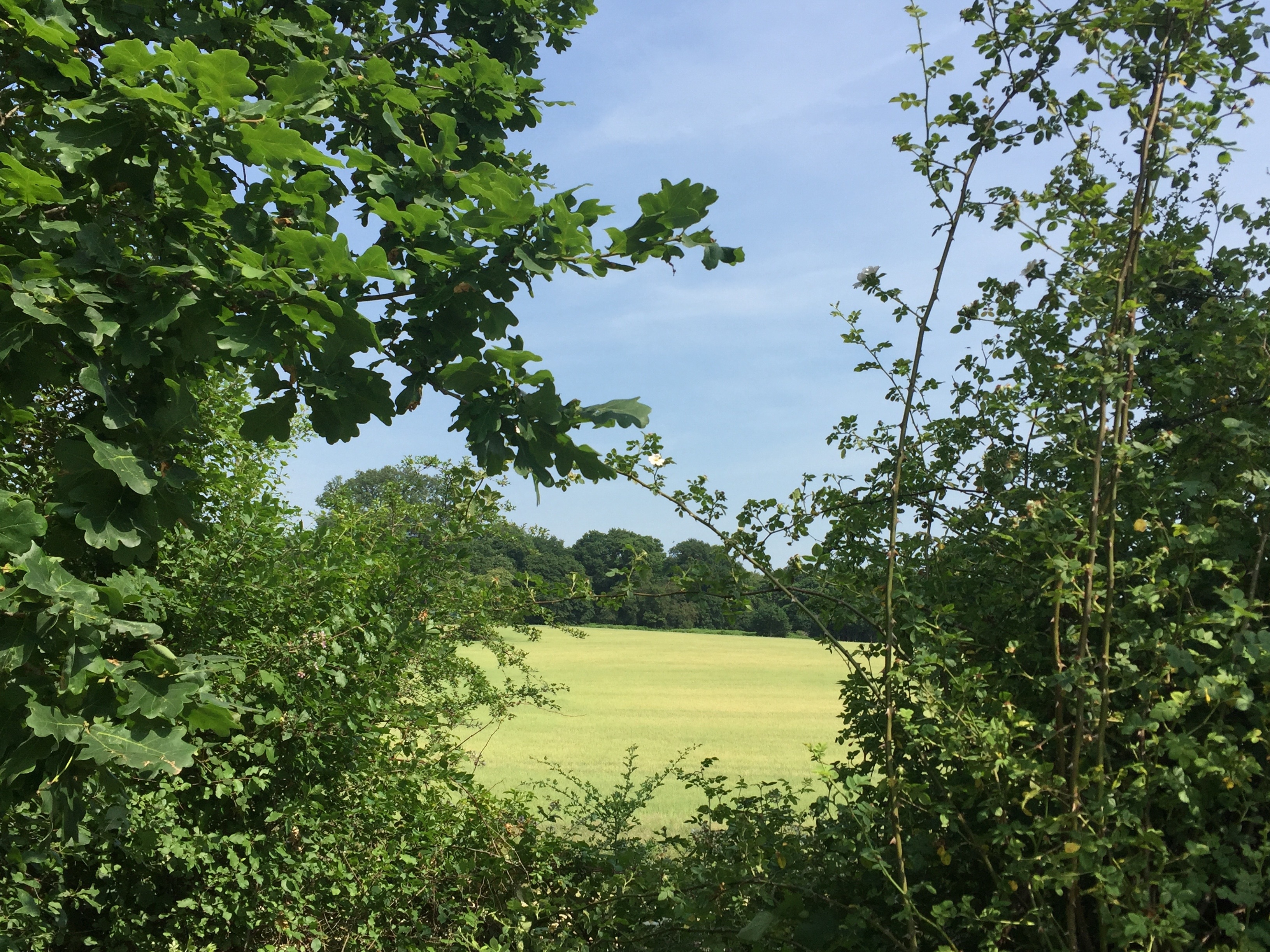 Views all around are absolutely stunning. 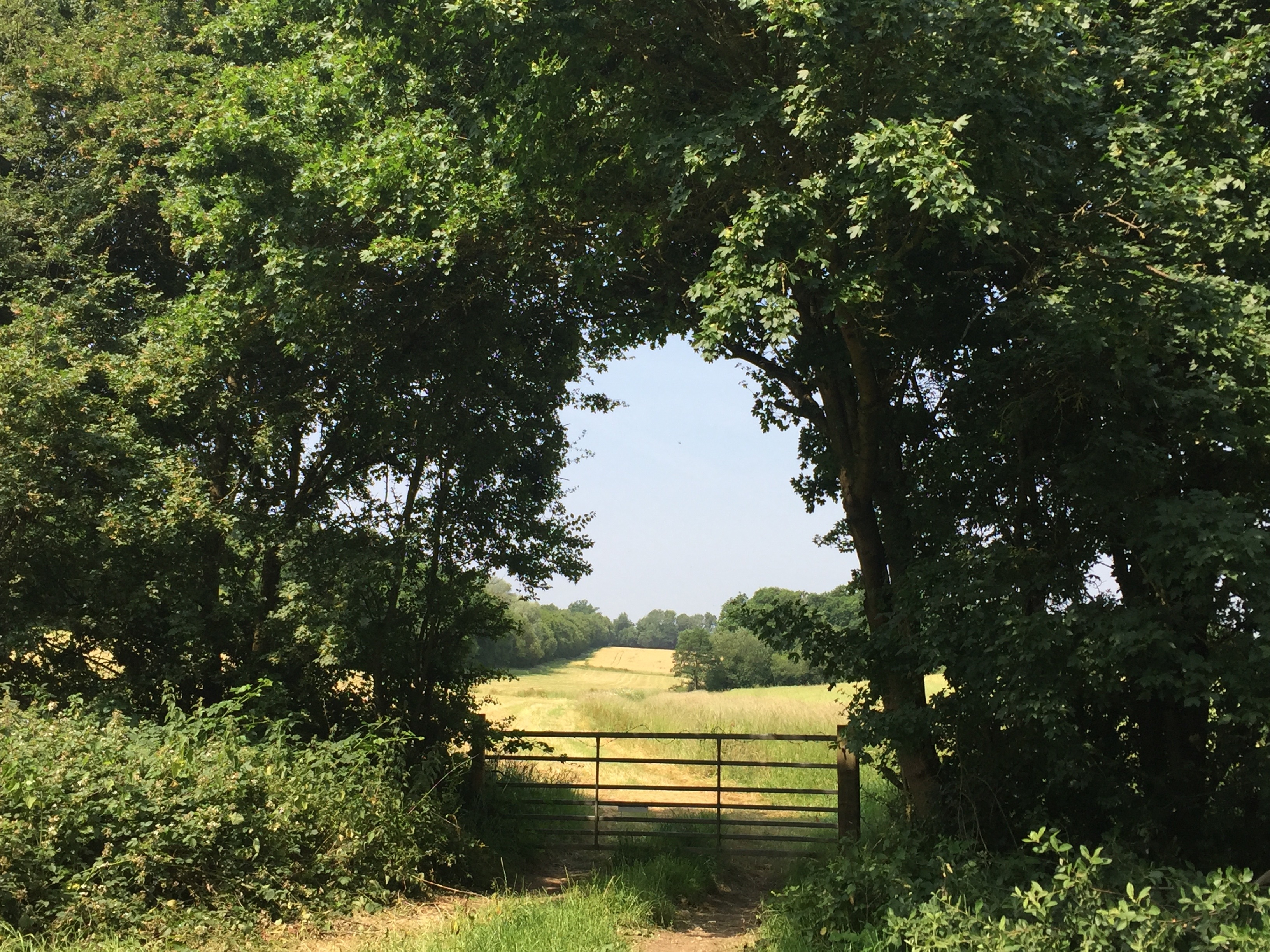 I follow the path around with a lake over to my right until I come to a wide grassy path off to the left heading uphill which I know leads to the obelisk at the top – albeit at this time of year with everything leafy it can’t quite be seen from the bottom. 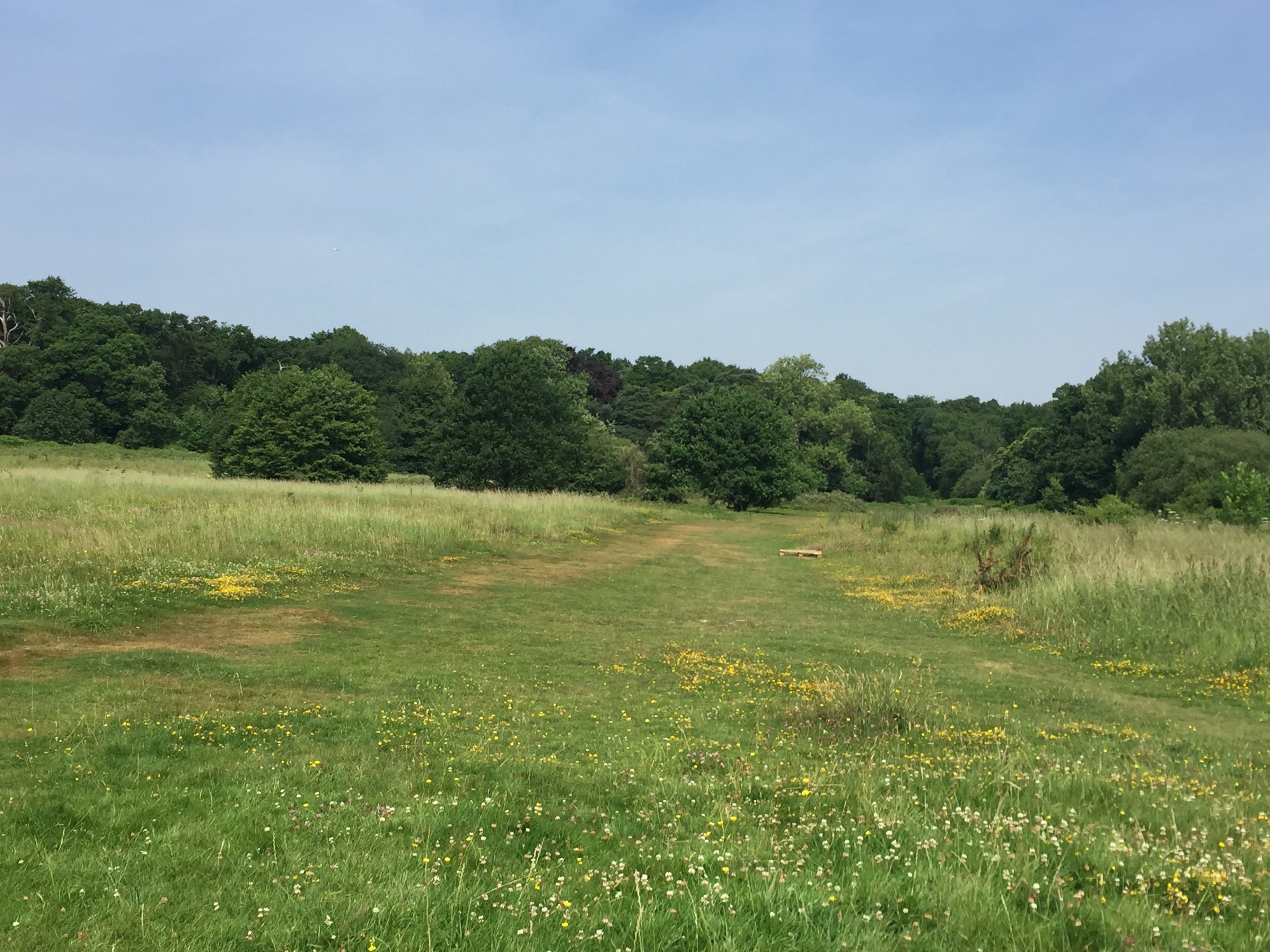 Here I turn left and head gently uphill towards the obelisk at the top. 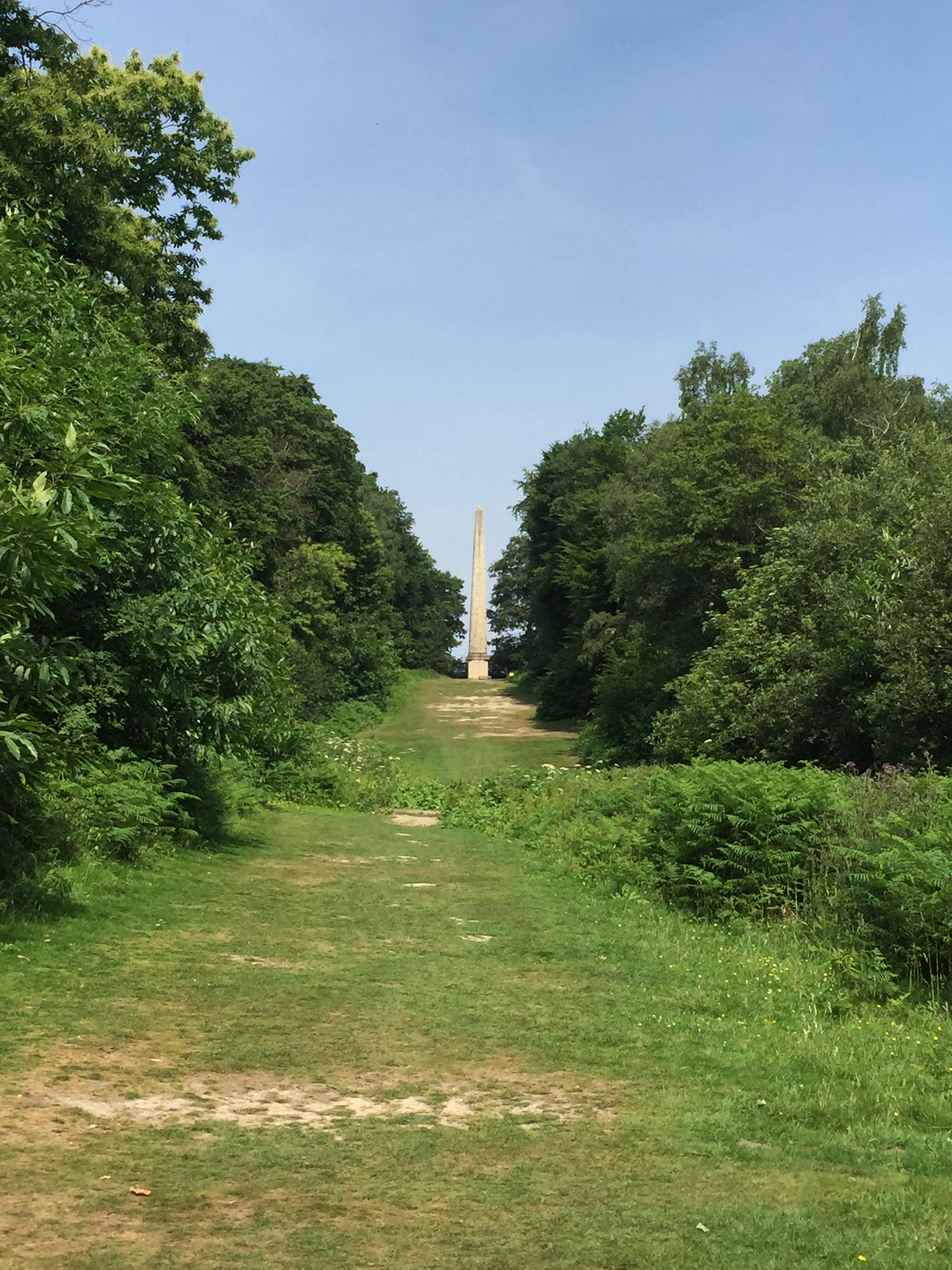 At the obelisk (after a long drink of water – this was a hot climb even if a very gentle slope!) I turn right and head gratefully back into the woods.

Following the path ahead – which veers towards the road – I take the path away from the road. After a few minutes I go through the gate to Camlet Moat – and here I follow the path around the very green pond. 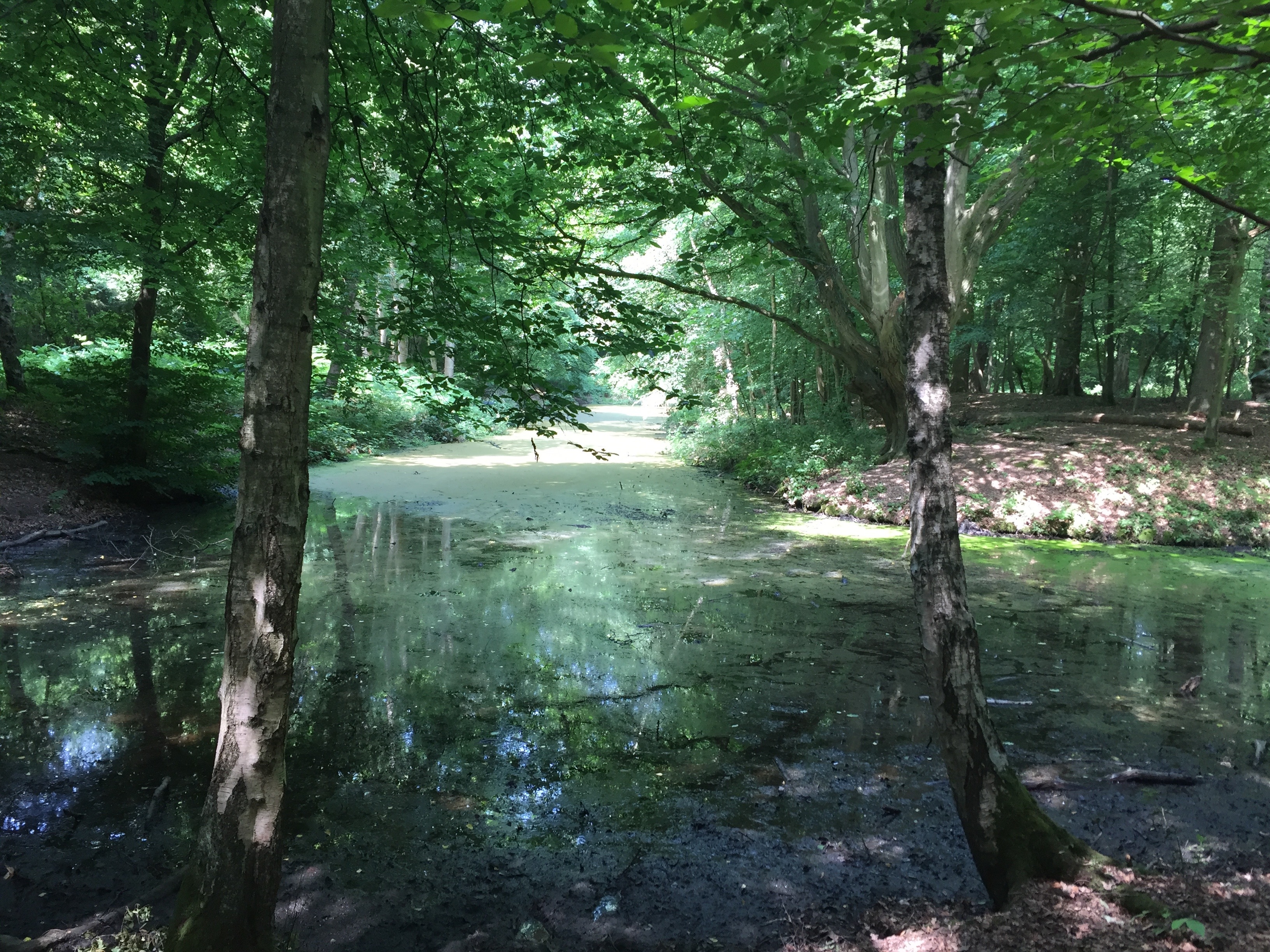 After walking around three sides of the pond I leave it through the second gate and rejoin a path heading away. I am once again walking along a shady path, crossing a couple of paths heading from left to right, and gradually approaching closer to the road. 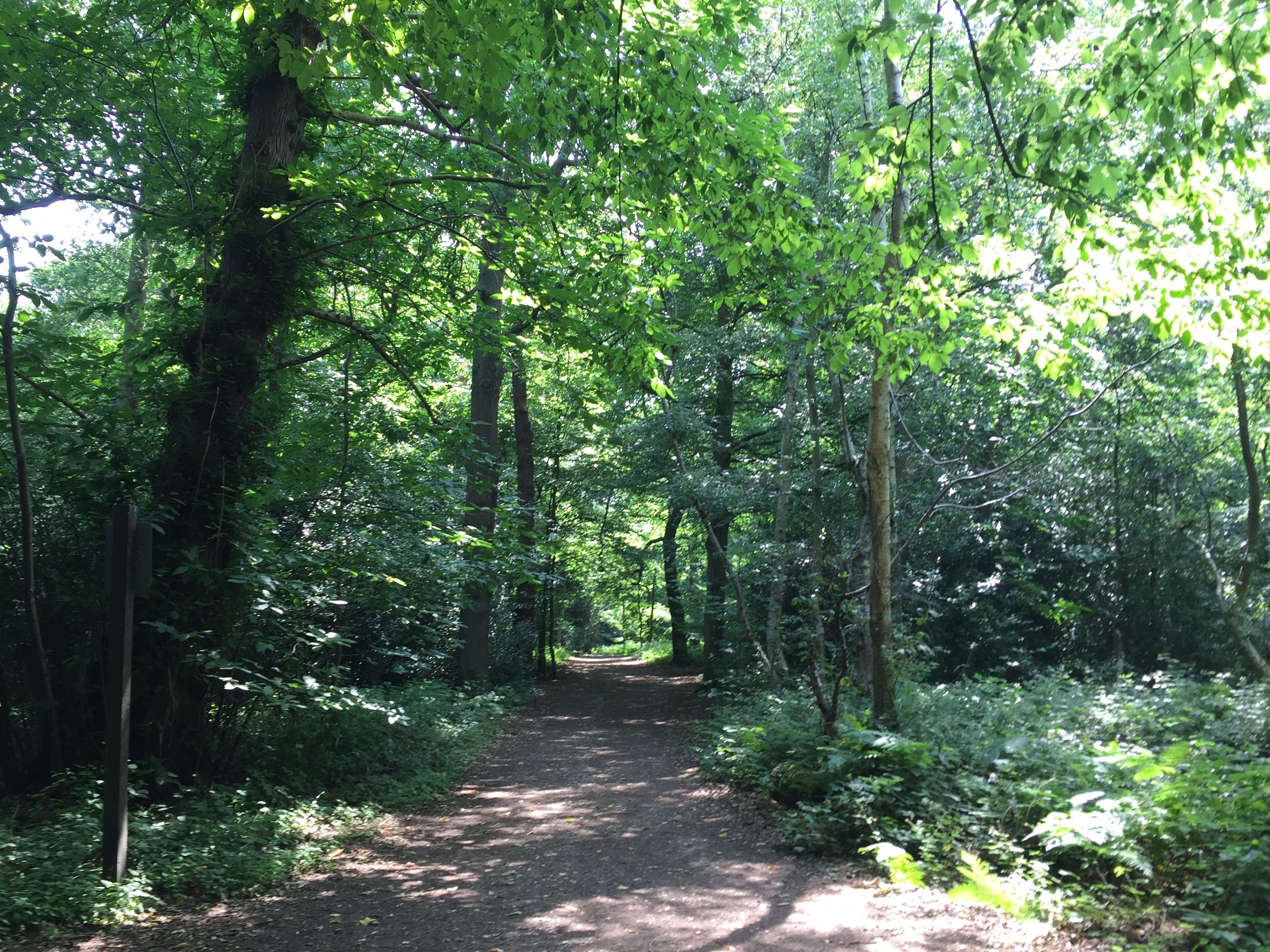 The woods are lovely here – quiet too, just the occasional dog walker – not uncomfortable for walking alone though. 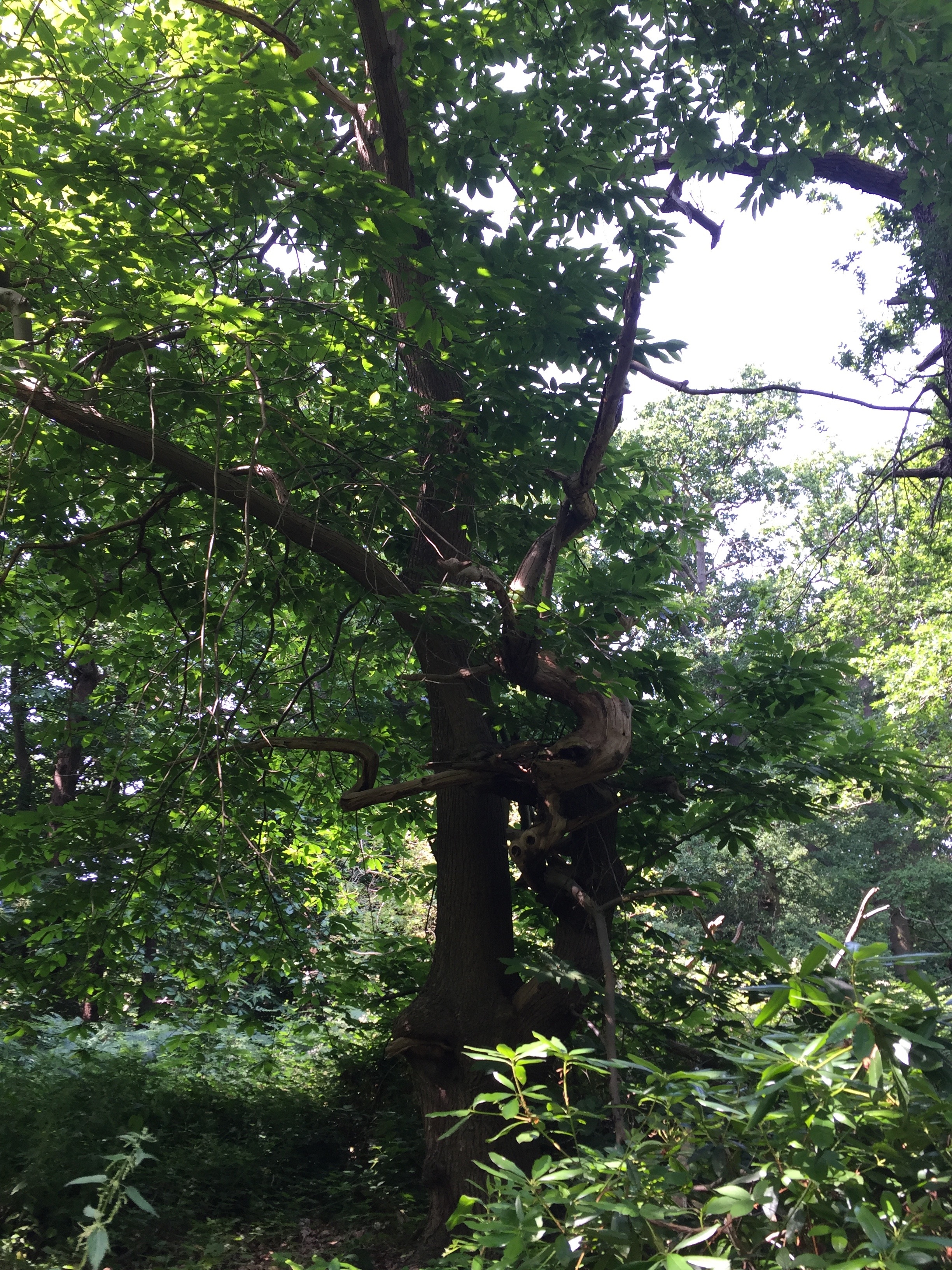 Just before the edge of the woods the path curves right and I go with it, views left are across to farmland, and I am gradually descending now. 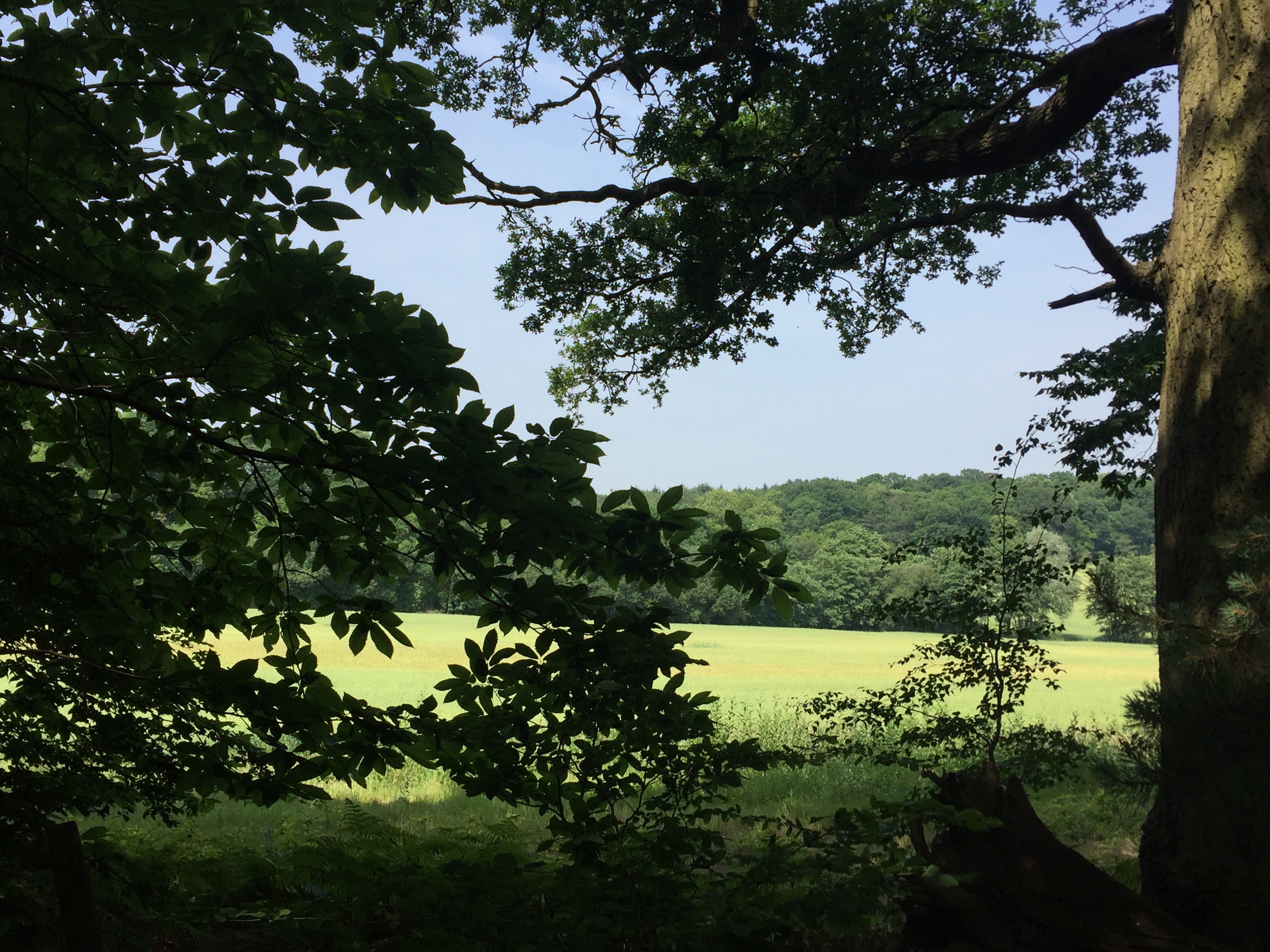 At the foot of the hill I cross a bridge over a dried up brook and head uphill, still in woodland.

At the top of the rise I reach a now familiar four way signpost and instead of continuing straight on I decide to take the path right signposted to Hadley Road. Here, after a couple of minutes, I find myself effectively doubling back to head the way I have just come – albeit several yards further over – and with a lovely view across fields to my left.

The path basically skirts the edge of the field and at the corner I decide to continue following the field by taking a path left. There isn’t really a fence here between the woods and the field so occasionally I walk along the field edge where there appears to be a very wide path and I continue, bearing left, to follow the field edge. 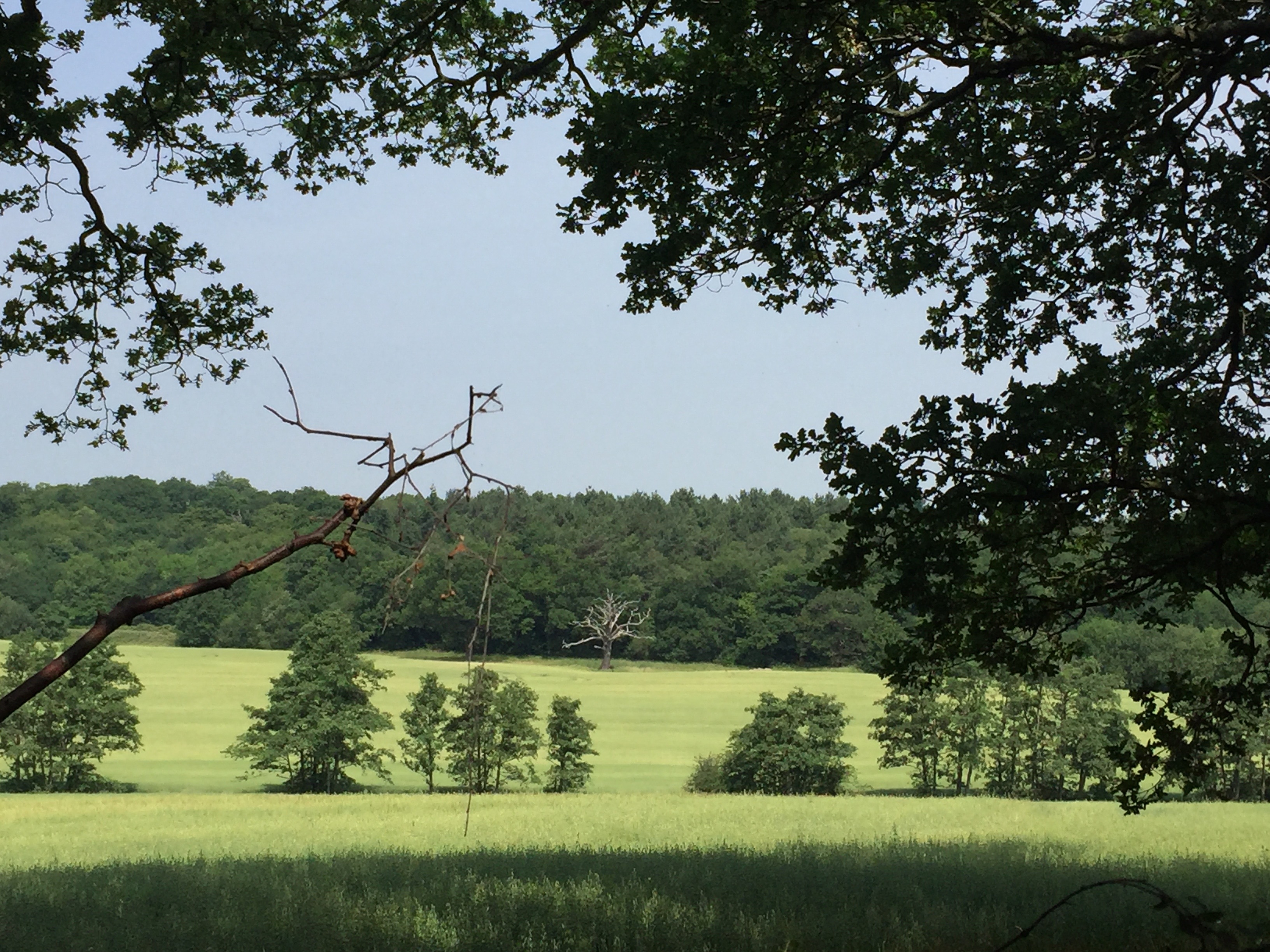 Finally I reach a path arriving from my right and immediately on my left I see the entrance to the water garden and I decide to go in. Just here there is a lovely sunken Japanese style garden – with streams and pretty bridges – and terraced planting. 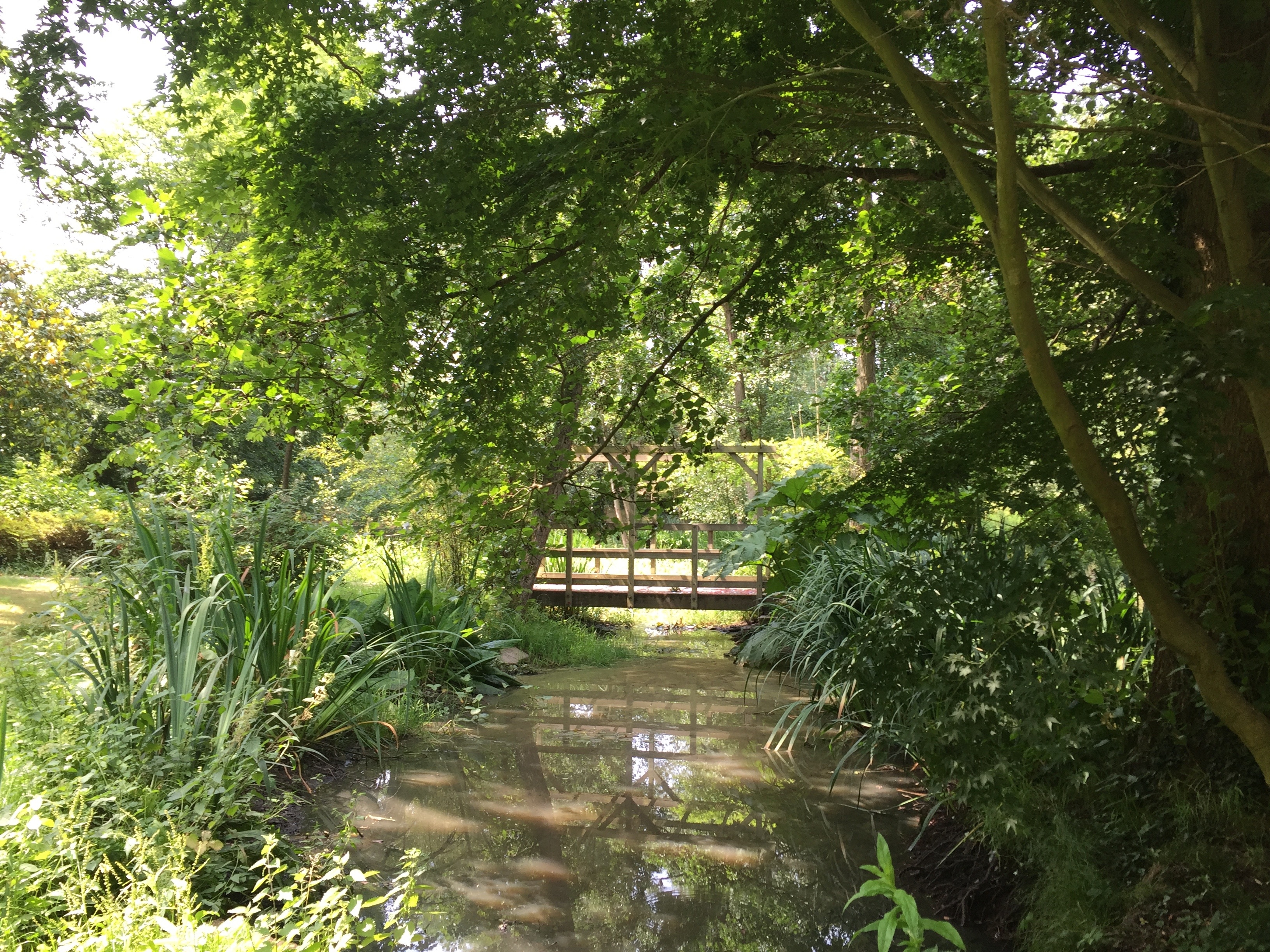 I walk along the bottom of the garden and then climb some steps to a view over a beautiful lake. 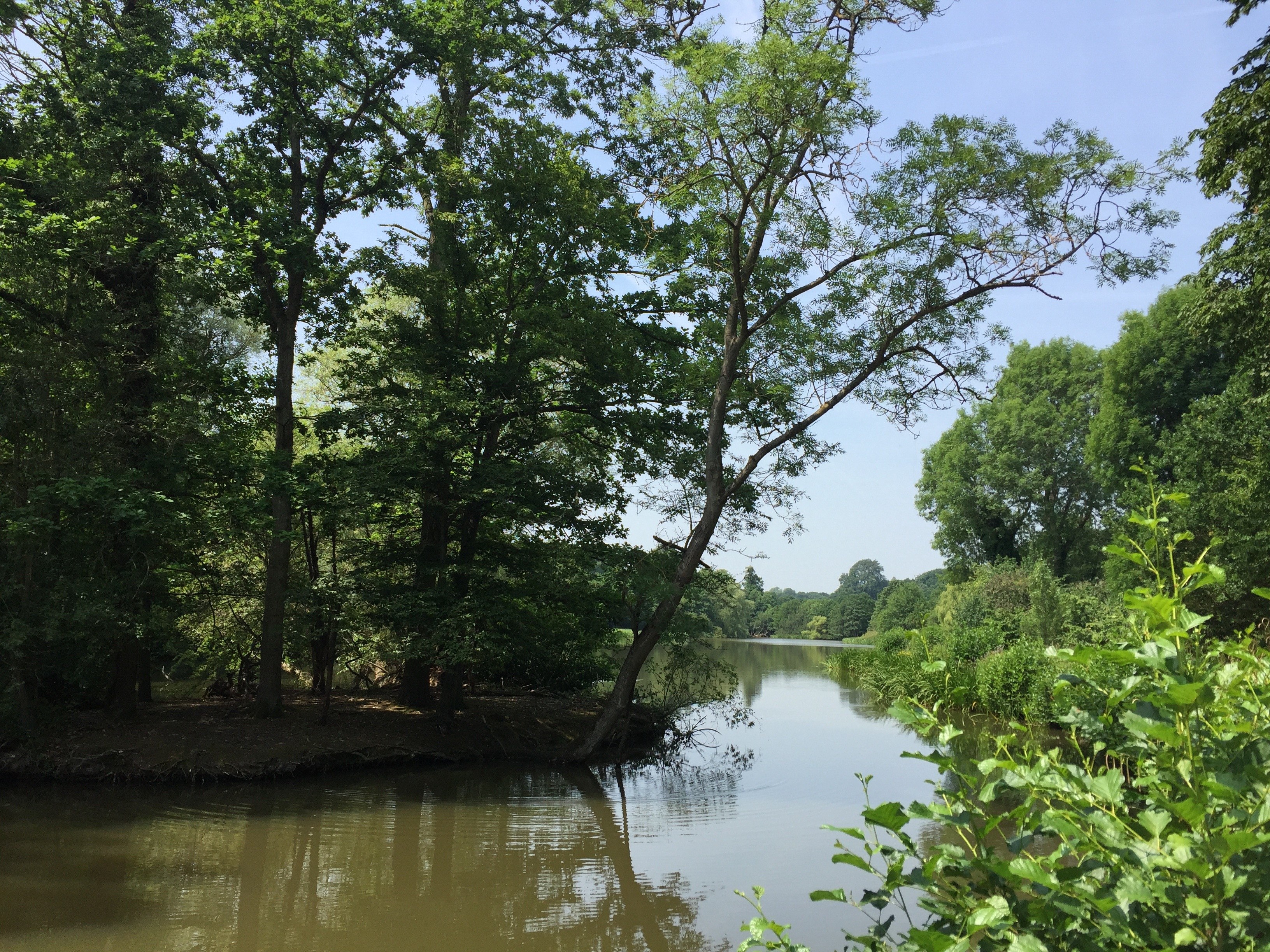 I turn left here just to check something I remember from years ago – and yes, there is still a fording place across the stream feeding the lake. Even though it’s almost dry today, I don’t fancy trying it as I’m not entirely sure how much of the land on the far side is accessible. 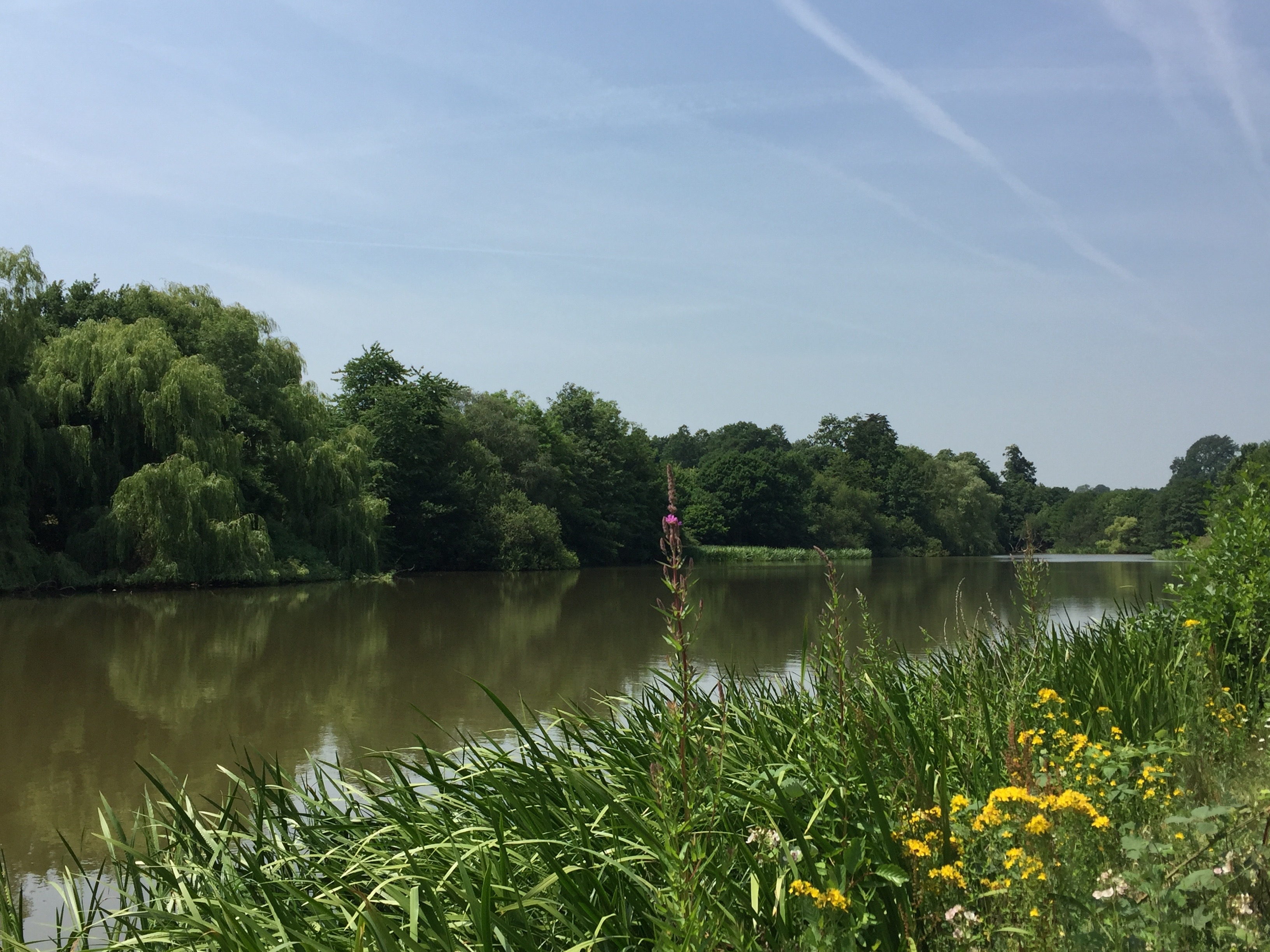 And so I turn on my heels and start walking on the path beside the lake. It’s so pretty, with wildflowers along the edge and duck families on it’s surface – impossible to resist a few photos! 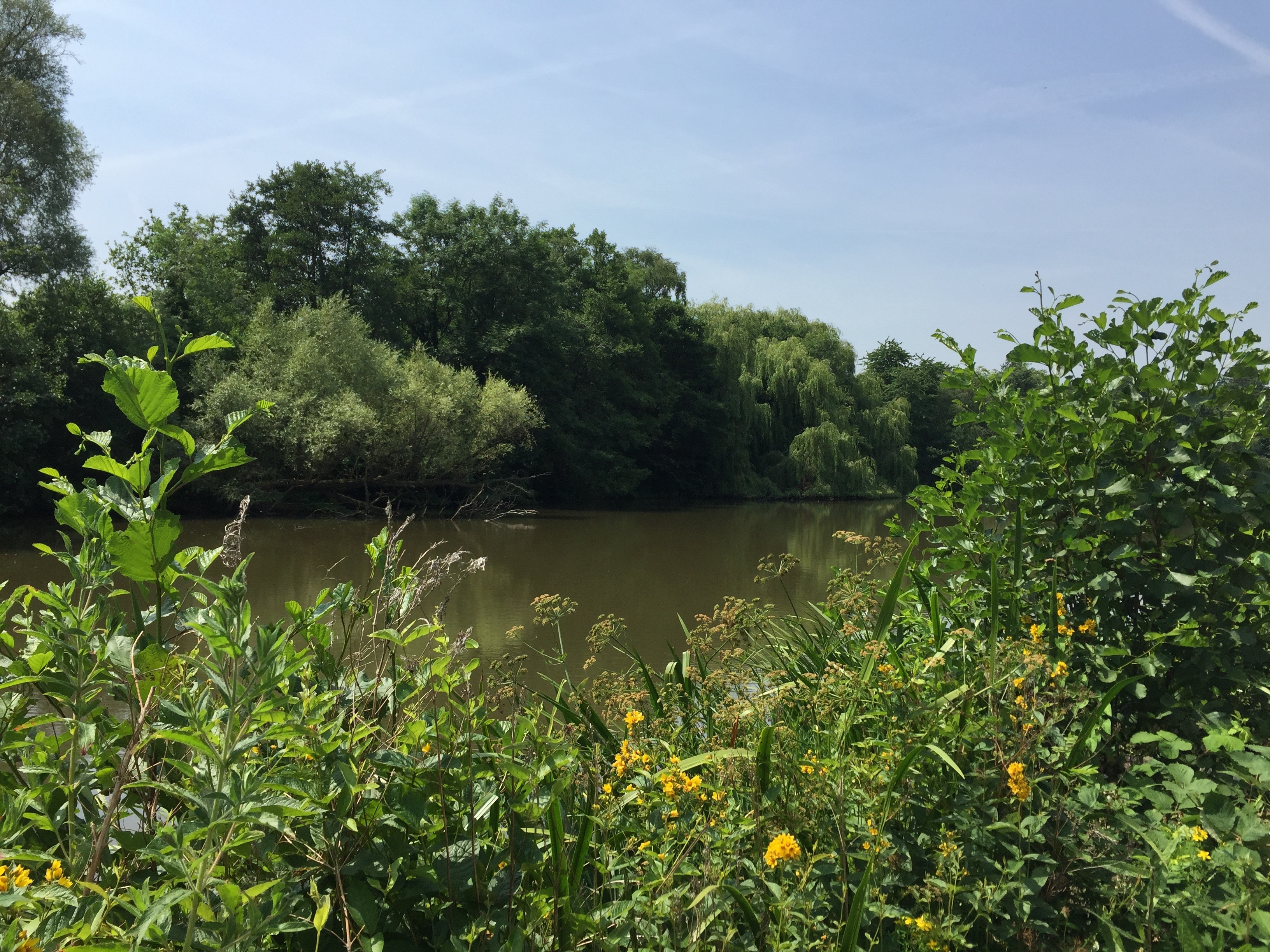 As I return to the point where I entered the water garden the paved path disappears and I take a grassy path off left to continue alongside the lake. 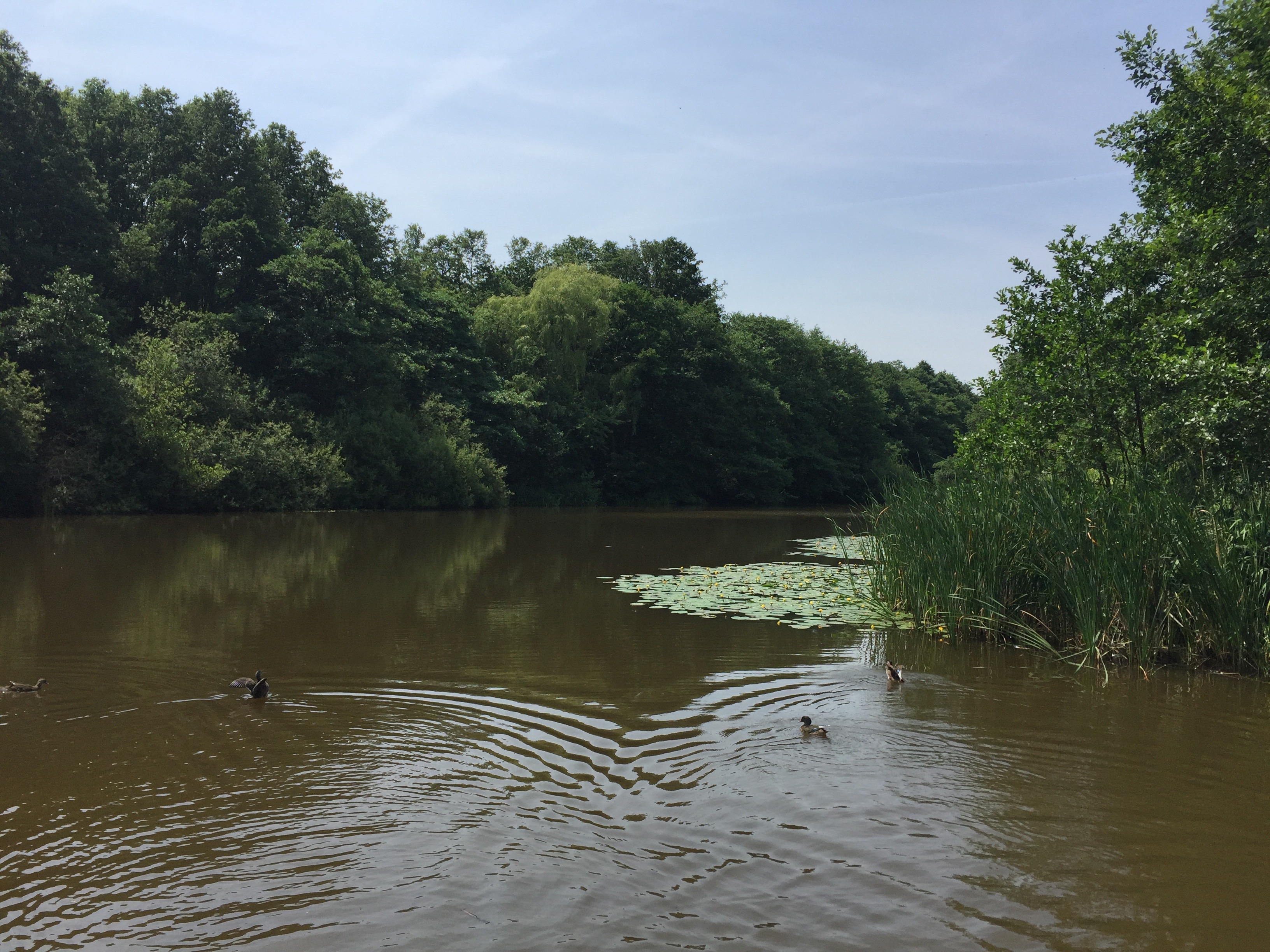 This clear, but not particularly well-surfaced, path continues to hug the lakeside until I draw parallel with the path I came out on, more or less opposite the path up to the obelisk. I gradually approach the main path and now retrace my steps – past the lake and right at the meadow back to the woods and eventually to the car park and cafe.

Here I return to the toilets – to be sadly disappointed (I make a complaint to the council online but as of 3 weeks later have still not had a reply!!). The cafe, however, is by contrast a complete delight. I enjoy a really cold drink and yummy club sandwich – sitting outside under an umbrella and beside the fountain.

Despite the foul facilities it’s been extremely enjoyable. Such a shame that 2 weeks in a row I’ve encountered horrible toilets – both under the control of Enfield Council – hopefully this will be resolved very soon.